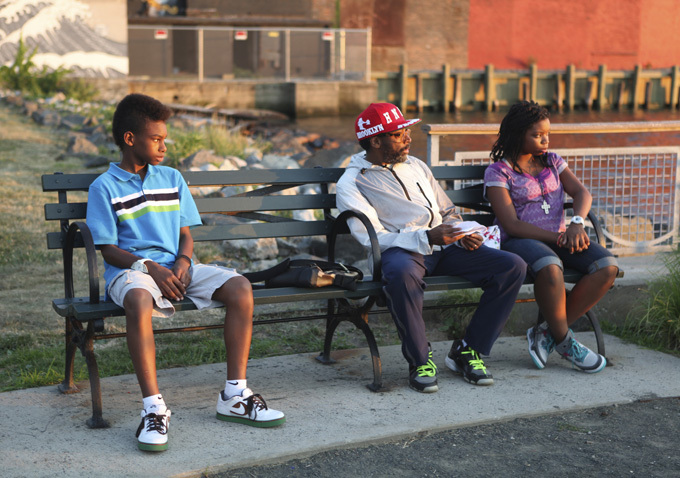 Earlier this month, I was invited to Spike Lee‘s Brooklyn-based 40 Acres and Mule Filmworks, whereat yours truly was able to sit down with the Red Hook Summer director, his co-writer (James McBride), and the film’s main cast (Jules Brown, Toni Lysaith, Clarke Peters, and Nate Parker). The whole lot showed a clear passion for telling this specific story in this specific place because, if you were to ask them, the combination is extremely potent.

After gawking at various memorabilia which hangs around the 40 Acres office — signed posters for Apocalypse Now and various Scorsese features stood out amongst the Sal’s Famous delivery box — Lee sat down alongside Brown and Lysaith, though the foremost of those three did a majority of the talking.

Lee credited Edward Robinson, a teacher at Brooklyn’s Ronald Edmonds Learning Center — which he attended as a child — for discovering Brown and Lysaith, both of whom he observed in acting classes during their seventh and eighth grade tenures; working with them, by all accounts, appeared to be a pleasant experience, though the man noted that young actors “teach me patience.” He also relied on some other young folks when crafting the film, as his teenage children were able to provide advice on depicting something as simple as the main character’s iPad.

There’s something of an overlay, in that sense, with who the director hired to act as his crew: NYU students. Lee acts as one of the university’s artistic directors, and he said it would only be “the total antithesis of education” for him, a teacher, to make a film in the general area and not hire them. While students had worked on, for instance, Inside Man as interns, they had been hired for everything — from members of the sound crew to assistant cameraman. Lee admitted that this confluence of a seasoned pro and so many newcomers led to, as he said with a pause and a smile, “a lot of learning on the set.” Whatever problems may have been arisen from that (though no huge issues were hinted at), the man reiterated his point by asking me this: “How can I be a teacher at NYU, do a film, and not include my students?”

Given all the hubbub about filmmakers transitioning from celluloid to digital, I also made sure to ask Lee if shooting Red Hook Summer digitally — this is his first narrative shot in the format — changed his approach in any significant way. His answer? “No. It’s filmmaking.”

In that regard, Spike Lee seems willing to embrace whatever comes next. Despite the fact that, in his own words, a) studios “weren’t going to make this film,” and b) “a lot of people have misconstrued this film as a declaration that I don’t do studio films anymore,” the future will hold a mix of independent and studio efforts; for instance, he’s doing the Oldboy remake next. Although the two child leads were interviewed separately from Peters and Parker, all four were synonymous and unanimous in their praise of Lee‘s direction. It’s been noted that Red Hook Summer was shot over the course of 18 days — a feat which is all the more impressive when you remember the thing clocks in at around two hours — and the actors all appeared to relish that work schedule.

Brown and Lysaith liked an expedient pace that kept things fresh, while Peters, undoubtedly the most experienced actor of this set, held it up well against other film productions; in those instances, “there’s a lot of wasted money because things aren’t prepped properly.” Here, no one had any time to waste.

That certainly sense of trust began in pre-production, where Parker, in a lesson imparted by Denzel Washington, accepted the part of a gang member on Lee‘s offer alone. In fact, the up-and-comer went so far as to say that “any other filmmaker in this industry” probably would’ve been turned down. Why? It’s simple: Because he can’t trust them in the same way. This was corroborated by Peters, who said that, when the chance to work with him comes in, “you run towards it, because you’ve finally found your team.”

When I asked either if Lee was particularly controlling in his production process, the Wire star illustrated their experience rather clearly:

“As an actor’s director, he was fantastic. He trusted me to go with it. During the sermon and after the beat down, he said ‘Keep going with it.’ Very rarely do you rehearse a scene with a director, and then you can start do the scene, you come to the end of it it, but you, as an actor, feel like there’s still more going on — and a director is able to see that. It’s very rare. In some of the sermons, it took a while to get into it; I don’t know how many takes we did, or which ones they took, but I have a feeling that he took the ones where he said ‘keep going.’ Because he gave me the freedom to be in there. That’s not a ‘controlling’ director. That’s a director.”

McBride‘s words were brief, though the second voice behind Red Hook Summer did reveal that he was the main source behind its aforementioned sermon scenes, or what’s casually referred to as “that whole business.” In creating these lengthy sequences, the novelist simply drew upon childhood experiences of visiting godparents in Red Hook, Brooklyn — not that location matters. McBride and Spike Lee aimed to make “a story about the innocence of a black kid,” bearing in mind that this kind of story, as Parker noted, could take place — and, therefore, should be seen — anywhere.

Today is your chance. Red Hook Summer is expanding to more major cities.