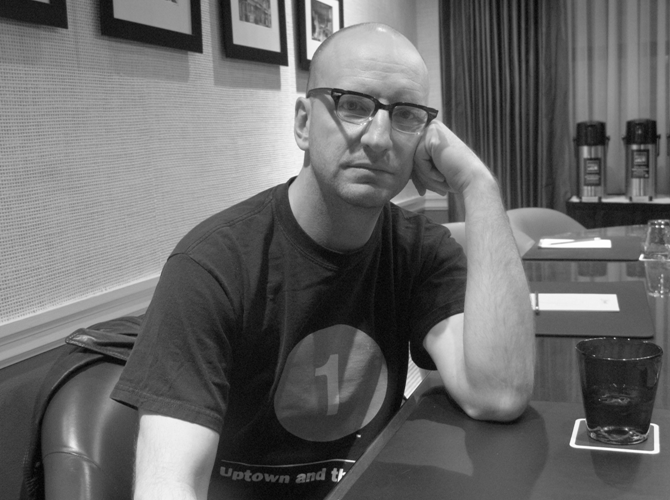 When his Contagion lead Matt Damon told the LATimes a few weeks ago that Steven Soderbergh planned to retire, it naturally got people’s attention. Now the writer and director has publicly made his thoughts on the issue clear, as well as giving us new details on that film and the forthcoming Haywire.

First, the whole retirement issue. Talking to, of all people, Rich Eisen of NFL Total Access (via GordonandtheWhale), he jokingly stated that him and Damon were both “very drunk” when he made the comments that the actor later quoted to the press, but an inebriated state doesn’t mean that the comments didn’t have some truth to them. While he didn’t come right out and say that he was retiring, he made it clear that he planned to “wind it down,” although for him that means he still has some movies left in him. In addition to the two movies out this year, he still has his Liberace biopic with Michael Douglas, and is intent on doing The Man from U.N.C.L.E. with George Clooney in the lead. Even he seemed doubtful about how soon his exit from the industry would occur, as he said “anything could happen in this business.” That much being said, I wouldn’t expect him to stick around for much longer after those projects are done.

When it comes to Haywire, the director confirmed himself that it’ll be in theaters on April 22nd of this year. He shared the pretty funny note that the film’s star Gina Carano, an MMA fighter herself, scared off some male stars as they apparently weren’t comfortable with the idea of being beaten up by a woman onscreen. There’s just something that makes me chuckle about the apparent gender politics that are still apparent in Hollywood today, despite many advancements being made in that department over the past few years. For fans of action set-pieces, they may be interested to know that there’s a “hotel suite sequence” that the director describes as “fun.” To my memory he’s never made anything resembling a set-piece (other than some scenes in Che), so I’m curious how it comes across when seen through his stylistic eyes.

Finally, regarding Contagion, the thriller starring, among others, Matt Damon and Kate Winslet, the way he describes it comes across as more of a horror film than anything else. In addition to the description of it being “brutal” and about how “we should stop touching each other,” apparently there’s some kid-killing going on. None of this is particularly that shocking to hear, as the story of a disease outbreak that needs to be stopped usually contains such elements. And while I’m not the biggest advocate of such acts onscreen, seeing it occasionally (and especially in a major studio movie) is always a surprise, so it should work in the context of a movie like this.

I’m excited for all these projects, but the one that I find myself most curious about is easily Contagion, and hopefully we’ll soon hear more about all of these as we move forward in the new year. I wish that Soderbergh wasn’t leaving us so soon, but it seems like he’ll be going out with something of a bang.

What do you think of these projects? Do you think Soderbergh is really retiring soon?