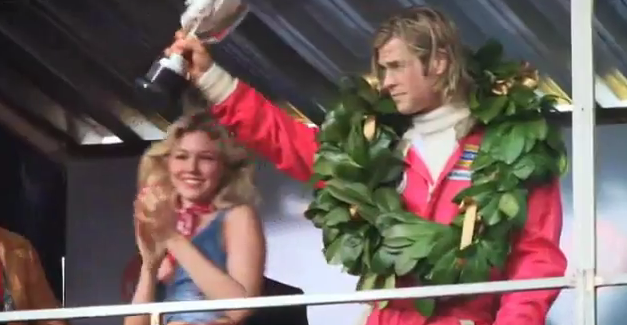 Ron Howard, being an (albeit affable) guy I don’t keep very many tabs on, made a potentially interesting project under my radar. I had both heard of and written about Rush when it was in pre-production, sure (I just forgot about it since then), but a new featurette has brought the film back to my attention — and, though it’s probably not indicative about much of the final result, I do like what this has to show me.

Chris Hemsworth and Daniel Brühl (Inglourious Basterds) both look confident as real-life Formula 1 rivals James Hunt and Niki Lauda, respectively, with the former carrying the physicality of a Norse God (take this as a second to collect your sides) and the latter doing some big-time pondering in the seat of his car. (He was a thinking man’s driver, you know.) And how about those suits?

I mostly jest with an analyzing of their quick appearances, but if he’s being genuine (and can deliver), some of Howard‘s own comments — specifically, about how one treats the little-depicted style of racing — have me hoping. I don’t exactly know for what, though I might, now, anticipate insight into a world I have just about no information on.

Set against the 1970′s golden age of Formula 1 racing, “Rush” portrays the fast-paced and exhilarating true story of two of the greatest rivalries the sport has ever witnessed – that of James Hunt (Chris Hemsworth) and Niki Lauda (Daniel Brühl) and their illustrious Formula 1 racing teams, McLaren and Ferrari. A privileged, charismatic and handsome English playboy, Hunt could not be more different from his reserved and methodical opponent, Austrian born Lauda. “Rush” follows their personal lives both on and off the track and charts their rivalry from its inception in Formula 3. Here they competed viciously against each other until Lauda’s business acumen and surgeon like precision behind the wheel propelled him all the way to Formula 1; eventually landing him the number one spot at Ferrari. However it was not long before rambunctious golden boy Hunt fought his way into Formula 1, and into the hearts of a nation, dramatically seizing the championship from Lauda and proving to the critics, and more importantly himself, that there was real substance beneath the stylish exterior.

Rush should open at the end of the year.

Does this quick featurette bring Rush to your attention?