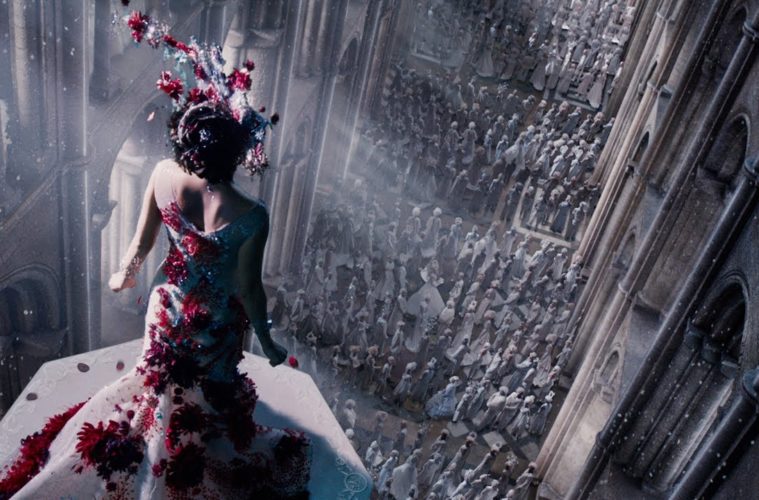 It’s easy to forget amidst some of the widely established franchise fare, but a new film from the Wachowski siblings, still, years on, some of the more ambitious big-budget filmmakers working today. If there’s a problem, it may rest in the details: we’ve only seen two previews for their next effort, Jupiter Ascending, and neither have seemed to inspire much of a reaction outside of a collective “huh?” and shrug. Channing Tatum‘s albino wolf and Mila Kunis’s intergalactic princess need to pick up the pace if the dollars are going to roll in.

This, I think, will not help. After two mild displays, the big gun pulled out here is a poorly assembled trailer of visually and spatially incoherent segments that, needless to say, does the project no favors; we’ve moved from a less-than-inspiring logline (so, Snow White in space?) to the sight of tiring designs. My current reaction is more the fault of Warner Bros. than Lana and Andy Wachowski, yes, but plenty else needs to be established on their front before I’ll perceive this as more than just another colorful tentpole. Jupiter Jones (Kunis) was born under a night sky, with signs predicting that she was destined for great things. Now grown, Jupiter dreams of the stars but wakes up to the cold reality of a job cleaning other people’s houses and an endless run of bad breaks. Only when Caine (Tatum), a genetically engineered ex-military hunter, arrives on Earth to track her down does Jupiter begin to glimpse the fate that has been waiting for her all along—her genetic signature marks her as next in line for an extraordinary inheritance that could alter the balance of the cosmos.

Has this push for the Wachowskis’ next effort many any positive impression on you?