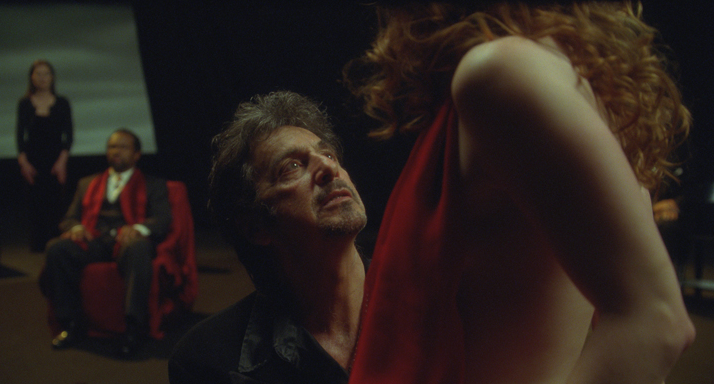 2014: the year Al Pacino regains some long-lost footing? While his recent transition to stage performances has earned the sort of acclaim he’d not seen since the 1990s, the recent film career is… sure, there was Insomnia and Angels in America — Ocean’s 13 is fun, as well — but the rest is far too spotty for someone who’d been submitting good performances to strong films since 1999, let alone a legend. After a while, you were glad to see him gone just because it meant no further embarrassments.

But this year brings two festival titles (both of which we have reason to anticipate) and, in some markets, his long-gestating passion project(s): Salomé and Wilde Salomé, the former an adaptation of Oscar Wilde‘s final major work — more specifically, a filming of a staging of that work — and the latter a documentary on that production. It’s been a long time coming: said production commenced all the way back in 2006, with the turn of its virtually unknown lead, Jessica Chastain, supposedly landing her a top role in The Tree of Life. (Incidentally, Wilde earned Venice’s Queer Lion award in 2011.) Natural curiosity thus surrounds the endeavors — speaking for its long journey from shoot to screen — but also a curiosity with some more passion, given what glimpses of early- and late-career greatness might be offered therein. Though there’s still no U.S. distributor., those in the U.K. can see it on the big screen this September 21.

Watch the trailer below (via Empire): What do you make of this trailer and Pacino’s approach? Have you wanted to see the project for some time?