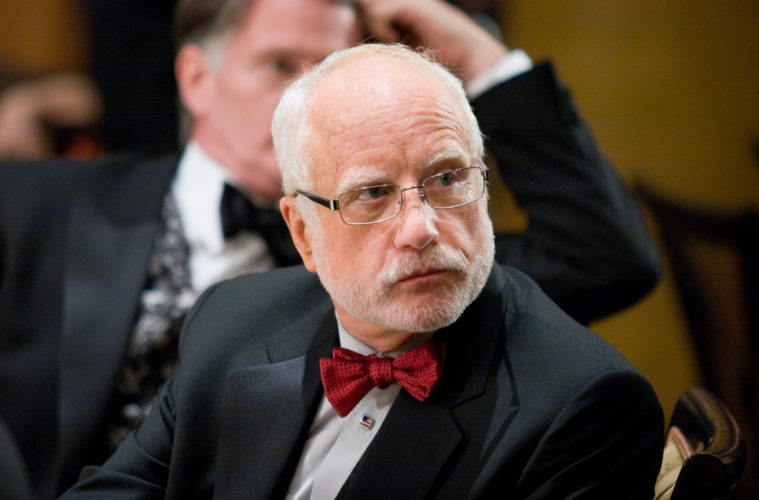 Things have been much slower in the past decade — that tends to happen when you used to be Steven Spielberg‘s favorite lead — but Richard Dreyfuss is still “around,” so to speak. While this is mostly accounted for by the occasional cameo role (Piranha 3D) and all those fun tweets, we’ve heard that two relatively promising opportunities have come his way — a couple of the better in some time, actually.

According to Variety, Dreyfuss is locked for Paranoia and Very Good Girls, two set-to-shoot dramas that happen to have impressive lineups at their disposal. The first, directed by Robert Luketic, stars Liam Hemsworth as a young, naive corporate employee tasked with spying on his company’s rival; another Spielberg veteran, Harrison Ford, is in the cast with Gary Oldman, Amber Heard, Lucas Till, and Julian McMahon. The participation of this newest addition remains a little mysterious, but it’s nevertheless entirely welcome. (It’s almost impossible he doesn’t get a good laugh.)

The other excursion will see him occupy some screen with Elizabeth Olsen, Dakota Fanning, Peter Sarsgaard, Demi Moore, and Boyd Holbrook. Naomi Foner has written (and will direct) the film, a drama about “two lifelong best friends both determined to lose their virginity as a rite of passage into the adult world,” and whose friendship is strained when the same boy (Holbrook) catches their attention. Again, there hasn’t been any update on Dreyfuss‘ part — but I am holding out hope he can replace the younger thespian and, as a result, make this the most upsetting American film in years.

Groundswell Productions and Herrick Entertainment are producing Very Good Girls, which is getting ready to shoot next month.

Is it nice to see Dreyfuss get a couple of moderately-sized roles?