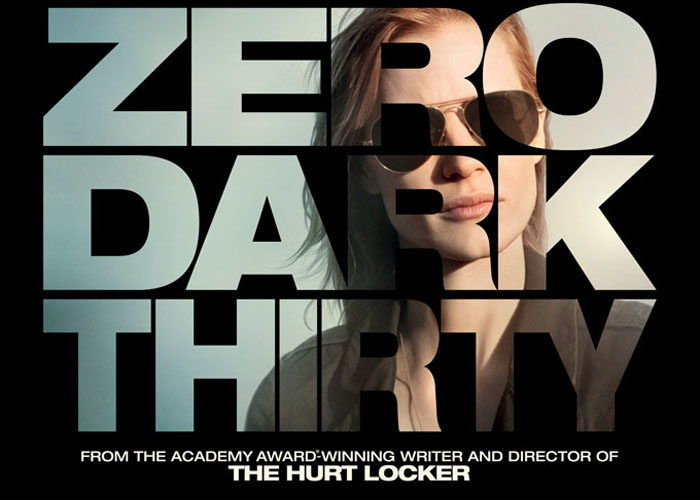 Zero Dark Thirty does not open on any of the faces in its talent-studded roster, but on a black screen overlaid with panic-stricken phone calls from the story’s own launch point. Once Jessica Chastain and Jason Clarke are introduced, roughly around the time of the American invasion of Iraq, one is in the process of “interrogating” a black site prisoner as the other quietly looks on. Just as the narrative communicates an unpleasant cause-and-effect scenario, it is also Kathryn Bigelow and Mark Boal — the respective director and writer, coming off a semi-recent award magnet The Hurt Locker — laying a certain blueprint for what is to follow: the cinematic consequence of real-world actions.

I apologize if that idea already gives their work some veil of portent best reserved for those Iraq War movies that bombed about five years back (let’s not name them, out of respect for those involved). We’re not talking about a picture I’d be keen to label “playful” — so long as that word’s still defined the same way — but it’s difficult not to appreciate the thrill afforded by Zero Dark Thirty’s intersection of plot, people and events into a full-on cinematic document. That it often feels like one we shouldn’t have access to, either, is really just part of said thrill. Unlike several other entries into this type of fact-based, long-form mode of investigative cinema — David Fincher’s Zodiac being one, Olivier Assayas’ Carlos (with which this shares the indelible presence of Édgar Ramirez) also springing to mind — it might be remiss to label Zero Dark Thirty a truly dense or, furthermore, entirely epic work. Despite putting its focus on the largest, most widely-observed manhunt in human history, a majority of the film’s narrative construction resides on simple back-and-forth conversational moments set amidst CIA offices, hallways, military bases and the like. Even the acts of torture, carried out by Clarke’s humorous enforcer, are, again, both an effect of one cause and, too, punctuation marks on the documented process.

Which, of course, isn’t by default bad — just different. It does, nevertheless, sometimes feel as though Bigelow and Boal have been inhibited by some sort of fidelity to what’s being presented as the record. Despite running a noticeable length and doing so without much in the way of noticeably extraneous material, there can be a sensation of going in circles as Zero Dark Thirty gets about halfway through its second hour; as this happened to be a long and frustrating journey for the men and women on the ground, there comes point in which viewers need to capitulate and land in the same mode of frustration as our central protagonist. After all, when you can start to sonically map the sound of a terrorism suspect’s name…

But don’t lose the forest in the trees, right? Because certain scenes may end up feeling greatly familiar as time elapses, it’s all the more impressive to note how Bigelow and Boal never let their momentum stop — or go to waste. This is, still, a film that always fascinates with its structure, being comprised of well-connected, beautifully-crafted threads that often intersect and overlap as these horizontal and lateral processes of governmental power. Both grounding and lifting that to something sustainable is Chastain, who’s given a rather unique challenge when tasked with the part of CIA agent Maya. The character is not at all unlike the writer and director’s Hurt Locker lead; this is not a person so much dedicated to their job as they are utterly obsessed and consumed by it. While that sort of approach — coupled with some weak stabs at pathos during the final moments — proved a hobbling creative choice once before, Boal has, now, wisely chosen to elide those sorts of elements, forcing the actress to work more as a conduit (sometimes, it feels, outright unit) of information than a real human being. It’s really only in the picture’s final two minutes when something like a traditional emotional response kicks in on her part.

Even if that were to be a flaw in the screenplay — though I don’t think that’s really the case — Chastain ends up taking the role and utilizing it as further proof of her immense talent. Maya’s goal — essentially, to see Osama bin Laden’s corpse — is not an entirely novel one, but that very overriding sense of determination, itself the driving force behind Zero Dark Thirty as a whole, is played up by the actress as a ticking bomb of extreme angst and the need to prove oneself. Those who haven’t seen the film for themselves can still understand the stirring context of her discussions with al-Qaeda members; the idea that a western white woman acts as a primary catalyst for the downfall of one who considers her kind a sworn enemy.

Despite being a tenuous idea as is, perhaps, maybe, such power is connected to the gender of its guiding hand; either way, there’s some truly next-level vibe going on with Bigelow. I’ve only found myself more and more taken with the work she’s accomplished here. This may not be great surprise — despite being bloodless and free of any true emotion, The Hurt Locker is hard to argue against as a strong formal exercise — but many an attentive viewer come to be forced into a corner by her incisive method of craftsmanship. The finest sequence of 2012, a brutally patient and surgical climax, all to its name. Chastain’s noted presence notwithstanding, there’s a rather incredible line of supporting players who flitter in and out of Zero Dark Thirty — Mark Strong (taking a few scenes to make himself another standout), Kyle Chandler, Joel Edgerton, Jennifer Ehle, Chris Pratt, James Gandolfini, and even Mark Duplass. As small and plot transitional as some of their parts really end up being — the lattermost is probably onscreen for somewhere in the neighborhood of two minutes — they not only bring something fresh to the table, but prove themselves as good foils for a star who, without them, would probably envelop everything else around her.

Standing back, then, does the cumulative effect of Zero Dark Thirty start to truly be felt. Coming at the tail end of an already fantastic year for cinema, we end up facing something completely unique — both a piece of entertainment that the masses can ingest and something worth both discussion & evaluation. Me, I’m content to take it as a stirring moral tale about how, sometimes, the means to an end leave you with no option of ever going back.