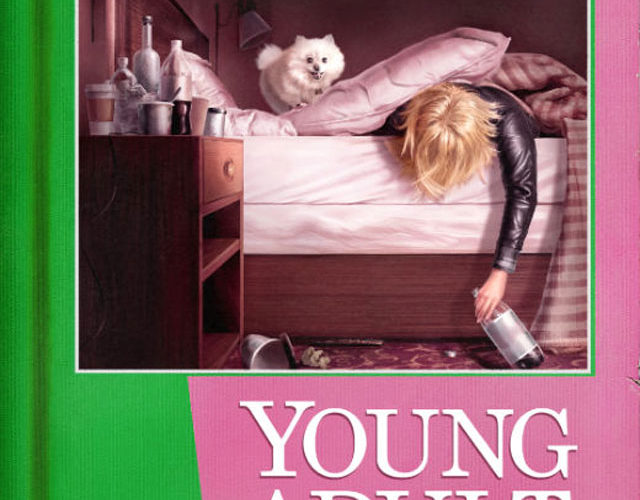 Any writer or director — in this case, Diablo Cody and Jason Reitman, respectively — walk a fine line when crafting a film about an “unlikable” character. Most would agree that any work, be it fictitious or true, requires its protagonist to do much of the heavy lifting, which itself should come through performance, editing, writing — hopefully, all three. But if your lead is an objectionable burden when they’re simply onscreen (hello, Greenberg), the entire picture collapses under its own weight. Young Adult doesn’t.

The film is centered on Mavis Gary (Charlize Theron), writer of a popular young adult series who’s in a personal free fall. When Mavis receives an email from an ex-boyfriend, Buddy Slade (Patrick Wilson), who’s just had a baby, she takes the invite to a party in her hometown as an opportunity to steal Buddy away from his wife (Elizabeth Reaser). Shortly after returning, she runs into an old, long-forgotten (if ever truly remembered) high school classmate, Matt Freehauf (Patton Oswalt), who she forms an unusual rapport with. However, though Matt tries to convince Mavis to abandon her sure-to-fail plans, she moves forward.

Mavis, is, at her core, a rotten human being. Being inconsiderate, often intentionally rude, and not entirely averse to destroying someone’s life means the character should be a complete turn-off for audiences — but she’s not. Credit for this feat of sympathy — that is, the fact that there’s any sympathy — belongs to Cody and, most of all, Charlize Theron.

It can be difficult for actors of her exposure to fully disappear into a role, to make us forget that we aren’t watching someone delivering lines on a film set. There’s a big advantage granted with Cody‘s dialogue; it has such a naturalistic (yet, and just as crucially, unique) flow to it, one which requires a good thespian to completely abide by what’s on the page if they want the material to work. Young Adult has the scribe working outside of the pop culture-laden stylings she’s been praised and criticized for in equal measure, but it still feels like a distinct language; Theron, for lack of a better term, speaks it like it’s her own.

Importantly, Cody‘s strategy for commencing the story gives an immediate insight into Mavis’ situation. She’s living in a decent-but-messy apartment, spends her days eating unhealthy food, watches trash TV, and bears an appearance not unlike my own during those occasional “why change clothes!” phases. The phone conversations with her boss (voiced over a phone by Reitman mainstay, J.K. Simmons) drive it home: This is a woman at the end of her rope, with a recent divorce, no discernible career options, and no places to go. Yes, Mavis might be reprehensible at times, but shouldn’t something be taken into account when much of that’s predicated upon being a failure?

All the same, I don’t think it’s out-of-line to guess that, on the whole, much of a viewer’s reaction to Young Adult will be generated from her with Wilson‘s Buddy. Throughout, he’s shown to be an upstanding, small town denizen who doesn’t have any far-reaching goals, but is happy with where he’s at in life; to put things another way, it’s never going to work between the two. Yet I began to forget this obvious fact as they got more and more reacquainted. While anybody with some sort of moral compass will feel as though something’s inherently wrong whenever they share the screen, a certain chemistry between Theron and Wilson translates itself to their characters. It also adds a certain sensation best described as… uneasy.

The thing is, any other film would pit the two of them as lonely, jaded ex-lovers who need each other more than they even realize — and, because we see everything through Mavis’ eyes, that’s almost how it comes across. But reality soon begins to filter in through the bars and fast food restaurants they occupy, until it finally takes precedence during the film’s confrontational climax. Diablo Cody‘s script is smart enough that, coupled with Mavis being evidently unstable on an almost chemical level, a sense of moral equivalency which finds its way through before the credits roll make her nefarious intentions easier to swallow.

If one were to discuss Young Adult, it would be remiss to not talk about Patton Oswalt‘s work here. Now, someone like myself might be a little inclined toward this film from the outset — since it gives him a major role — but it doesn’t discount his funny, heartbreaking performance. Films with a troubled lead often need an audience surrogate, and that’s where both the Matt character and Oswalt really shines. I won’t give away specifics of his own situation — discovering it for myself out was one of the film’s most rewarding aspects — but it’s difficult to picture someone not feeling immense sympathy for him from the outset.

When actually acting as a conduit, he’s both insightful and incredibly funny; how much of this comes from Oswalt‘s comedic background and how much is the result of Cody‘s own writing is up for you to decide. But who cares? He works wonders with a guy who also serves as both an opposite and compliment to Theron, and it’s amazing that he can go toe-to-toe with an Oscar winner like an old pro.

Oh, hey, notice how I’ve only mentioned Reitman‘s name twice? Well — here’s the thing about Reitman: He isn’t bad. He gets great performances out of his stars. He can properly compose a scene. He (along with cinematographer Eric Steelberg) gives the film a perfectly Midwestern aesthetic. He, most importantly, made a very good film.

Yet, despite all this, I never got the feeling that there was a director working here. When all is said and done, none of the scenes truly stand out because of his creative input; it’s all Cody and the performances, not the voice behind the camera. And, being an admirer of his work, that was by far the biggest disappointment of Young Adult. What’s stranger is that his previous output, even the generally flat Up in the Air, had a slickness to them that was fitting for their scripts and managed to keep things moving. So I was curious to see if he’d apply the same sensibility to darker material, or, more excitingly, opt to take a different route for something that doesn’t fit what we expect. I suppose one could make the case that this is exactly what he did — no matter what, the results are just sort of bloodless.

It’s kind of strange that the film can function as well without a directorial hand, but such is the quality of these performers and the script they’re working with. Young Adult is the kind of film that’s bound to deliver even more upon repeat viewings, be it extra layers in Cody‘s acerbic dialogue or added dimension to Theron‘s sunglasses-toting shrew. And it’s the best kind of romantic comedy: one with a bitter heart.