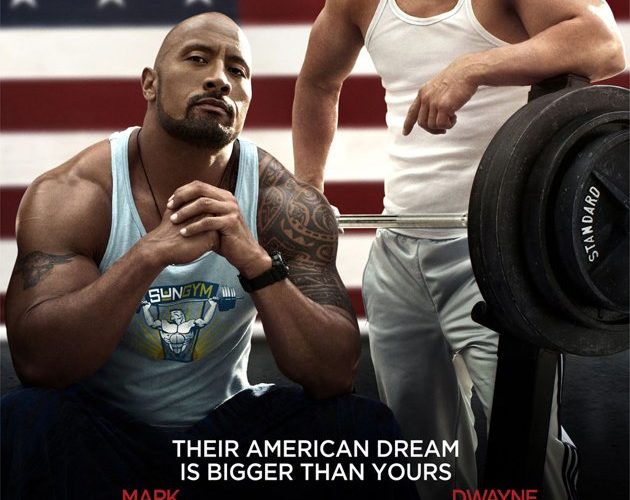 The journey took eighteen years and a number of huge-scale features  — many bad ones, no less — but, finally and fully, Michael Bay has become self-aware. There are many who will, understandably so, take Pain & Gain as more of the same from one of American cinema’s most infamous living voices: gratuitous violence, bracing homophobia, the treatment of women that launches past objectification and into something far more dangerous, a sense of humor in tune with that of a 12-year-old, and a meatheaded view of incident, all of which dialed so high that any worthwhile critical discourse has been almost entirely cast off. Pain & Gain “has” all these things, yes, and it certainly embraces what that would be expected to entail; in another sense, the nature of their inclusion, the characters who partake, and the extent to which they’re carried finds these pieces doubling back into a self-reflexive, hugely satirical view packaged inside his most formally accomplished work to date. Somehow, Bay understands.

It’s this unifying bond between the excessive — a sense of expression as central to the Bay oeuvre as anything one could attempt to name — and the wise which opens Pain & Gain to avenues of thought that would otherwise resonate as absurd. The Ed Harris-provided narration that opens the film, promising a fact-based narrative, is not a chance to scoff so much as it is an invitation to consider; as succeeded by a beautifully photographed, ethereally scored sequence wherein central protagonist Daniel Lugo (Mark Wahlberg) carries out crunches on a building apparatus, only to be chased by the cops in a short, slow-motion pursuit, the director finds himself operating within a different mode of cinematic language and communication, grounded but still willing to embellish and indulge. Breaking from the overwhelming abrasiveness of his Transformers series, however, it’s scaled down into genuine, stirring style.

What transpires from this point forward — itself mostly a long flashback to what led the character here — is an unexpectedly thorough approach toward matters of masculine instinct, which the director and his screenwriters, Christopher Markus and Stephen McFeely, opt to investigate by blowing apart and seeing what lays in the rubble. The items of action that have always been natural ingredients of Bay’s cinema — expensive clothing, cars, houses, and toned muscles — find themselves morphed in a self-conscious instance of camera-winking, transposed from the realm of affection and desire into flat-out derision. At long last, the vulgarity has a place: freed from the confines of a corporate product but, at once, without any real heroes to anchor the drama around, we can laugh at a gang rape joke in a Michael Bay movie because we (ideally) understand that it’s depiction which stems from observation, not the previous forms of engagement. If we didn’t laugh, shedding tears would be among the only remaining options — and it’d be hard go that far when so much on the screen is worthy of admiration.

Bay has always been a formalist keen to dial anything and everything of his interest to an approximate gauge of 12, the continued insistence of doing as much rendering his sense of control, here, an object of fascination. Telling this story with cinematography Ben Seresin — his DP on the far-uglier and visually inconsistent Transformers: Revenge of the Fallen — sees him return to the Miami of Bad Boys: a grainy, sun-lit hellhole from which gloss can still be mined — as opposed to marking points of titillation, instead making a window into the broken economy of self-worth these men live by.

Control is evident because of the smaller, visually resplendent touches which consistently surprise: various lenses instilling different tones and moods; a preponderance of reflective surfaces that, from time to time, recall the work of Fassbinder; or a roving camera that glides from room-to-room during the narrative’s pivot point — direct callbacks to the fight with Haitian gangsters in Bad Boys II — that engages as it propels. The trick has been repeated since his 2003 picture (the aforementioned Transformers sequel being an example) but never, prior, to equal effect as he contrasts and highlights differing concerns on the leads’ parts, in turn heightening an anxiety which, in Markus and McFeely’s screenplay, reach a head via motions that come across as preposterously violent as they do oddly feasible. (Wahlberg’s presence and pounding music did, admittedly, bring Boogie Nights to mind; the mid-90s setting could be said to have accentuated this, possibly.)

It’s shades of crassness masking a more canny, mocking intent found within nearly every level of the film’s humor — despite some asides landing more forcefully than others, as it almost goes without saying — all of which is carried to a fuller sense of place by Pain & Gain‘s ensemble. While Wahlberg and Anthony Mackie navigate levels of stupidity to strong effect, never once losing sight of undetected misanthropy, their performances can’t help but be overshadowed by Dwayne Johnson. This is someone whose transition into acting has been, although relatively comfortable, a bit safe, never given a chance to extend past three-or-so degrees of a certain character type. It’s of tremendous, pleasant surprise, then, to see how complex a figure he’s able to wrestle out of the character Paul Doyle, tonally oscillating from moment-to-moment in a given scene to lengths that are comedic and dramatic (frequently to the point of legitimately heartbreaking) in, marking a Bay first, balanced measure.

One of the more common criticisms thrown toward the filmmaker — an allegation which can stem directly from members of the cited party — is the disrespecting of actors, a member of the final product that, in his realm, are taken to be no more than additional props in his attempt at staging some extravagant setpiece. Past efforts have often validated the accusation, but it’d be a fool’s errand to use Pain & Gain as an accentuation of this point; in utilizing the disparate methods of Harris, Tony Shalhoub, and Rebel Wilson as snug fits with central content, Bay demonstrates an uncharacteristically deft hand at letting characters play a scene to its required measure and tenor. These performances, in their final form, come to be valuable because they’re given by those keenly aware of a greater joke, never letting the absurdity of any given situation (or the dialogue which propels it) to encumber or, worse, make cute the proceedings.

Less assured are a few stylistic garnishes, prime examples of the previously noted excess which, of course, by its very definition, is bound to present a little more than is asked for. Editing is appropriately hectic, yet a surprising length of the picture devotes its cutting schemes to multi-person, voiceover-accompanied montage that forbid audiences sufficient, necessary breathing room; e.g., why a stripper girlfriend gets her own mini-flashback is a question with no clear answer. Other boundaries feel explored for the contentious sake of simply being explored: discordant, (almost) never-not-galvanizing splashes of digital video distract, additional title cards struggle to gel with the use of narration, and Bay’s childish humor can still grate past the clear residency inside a warped character’s mindset. But if that’s the required price of a skewed view into the expounded-upon American dream, so be it: a little too much is, as a general rule, better than too little, and merely slight overflow from Bay, of all people, is nigh miraculous.

And, as it were, to think that the remainder could be accomplished in such a luridly entertaining package is what sticks in the mind hours after an initial encounter. This is not Michael Bay’s first enjoyable film, but it could very well stand as his best; far more than matching his prurient interests, Pain & Gain allows the director to stare in a mirror dirtied after years of chaos, only to find himself smiling back and embracing the newfound joke. It’s good to be laughing in unison.