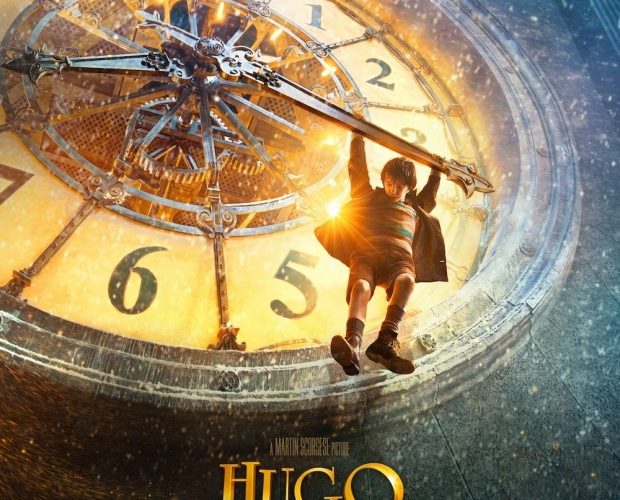 What constitutes “magic” in the movies? Is it the creation of a new world? The presence of dazzling special effects? Or simply the sensation of experiencing something no other medium can provide? For me, Martin Scorsese‘s films are magic, even though he’s mostly built a career focusing on guilt, gangsters, socialites, leaders, and male insecurity — not exactly material that most think of when trying to conjure images of whimsy.

Hugo — which just so happens to be his first foray into the world of family entertainment — is more about the former group of characteristics than the latter, but this doesn’t hurt Scorsese in any way; he’s too good to be inhibited by silly things like genre. From the lush cinematography to the roving cameras, along with a plot steeped in history pertaining to both cinema and the world at large, it’s one of his most satisfying technical exercises in more than a decade — and the actual movie’s not bad in its own right.

Based on Brian Selznick‘s The Invention of Hugo Cabret, the story centers on Hugo Cabret (Asa Butterfield), a young, orphaned boy living in the walls and hallways of a French train station in the early ’30s. Though he wants to finish working on a device that his father (Jude Law) introduced him to, his goal is blocked by a mysterious shopkeeper (Ben Kingsley) and a ruthless-yet-bumbling station guard (Sacha Baron Cohen). His adventure truly begins after meeting Isabelle (Chloe Moretz), the goddaughter to the mysterious man.

To reveal more than the basic setup would be something of a spoiler, and where it goes from that point on is sort of astounding, something best left for the viewer to discover with the characters. Honestly, the mere fact that Scorsese made a kids’ adventure film that deals with this particular subject matter — it’s kind of unbelievable. Almost as strange is the fact that, despite my strong affection for the film, much Hugo‘s first half wasn’t quite working for me as it played out. Whether that has something to do with the source material or John Logan‘s adaptation isn’t clear, but being unable to figure out why I should even get invested past the sets and effects is frustrating. Scenes almost stop and start at will, before we can really get a grip on these characters, or even why we’re following them; when motivations were completely hidden in the dark, there was a rather potent feeling of aimlessness and wheel-spinning. Take the strange romantic subplot involving Cohen‘s guard and a flower shop girl (Emily Mortimer) as a perfect example: it feels as though they’re simply trying to fill in space.

But, when the story reveals its true inner workings, most of what’s come before begins to click, and I found myself more excited by where things were headed than any other big budget film this year. Many things will pull you into the film, but Scorsese‘s manipulation of the camera, director of photography Robert Richardson‘s luscious capturing of 1930s Paris, and the incredible work done by the production design team stand out in particular. And, yes, there is that 3D. Look, I’m pretty biased against a filmmaking “tool” that I’ve never seen as more than a gimmick or, worse, distraction from poor storytelling — when one of our finest living directors has decided to embrace it, though… you start to pay attention. Turns out it was for good reason, since Hugo‘s 3D is some of the most entertaining I’ve come across since the format made a comeback a few years ago. I think the reason for this is twofold.

For one, Scorsese is such a master of the moving image that he’s aware of what will and won’t please the eye when an extra dimension is added. Secondly, and relating directly to that, this isn’t a theme park-style implementation; other than a falling wrench and some ashes, not much is “coming at you.” He’s mostly exploiting the space of the corridors and massive halls in the station, therefore opening up new areas that might not have otherwise been so pronounced. Even the people look different, almost like toy figures. Which is more than a little appropriate in the context of this story and one of its central characters. There is one particularly funny, 3D-based gag in which Cohen leans his face closer and closer into the camera, almost to the point where his face is occupying the entire frame and his head starts to come out of the screen. A simple moment where the method is being played with, but it also puts us in Hugo’s place; we’re experiencing the character’s overbearing behavior just as our lead does.

Is Hugo a better film in 3D? The fact that I’m not entirely sure is actually a big compliment to what’s been done here. Nearly every film I’ve seen in the format feels as if it would’ve been better sans the dark glasses, yet I could almost argue that the unique look created here is worth the extra ticket price.

It’s not all technical innovation, though. The performances, big or small, are all solid — without them, the sense of excitement and emotional impact just wouldn’t resonate in the same way. Almost the entire film rests on Asa Butterfield‘s shoulders, and, luckily, he helps defy the negative reputation that many child actors have been bestowed with. The emotional beats of Hugo’s story aren’t terribly innovative — his parents are dead, he lives alone and wants a family, etc. — but the adventure he goes on, as well as the incredible backdrop in which both that and his emotional peaks occur, give an air of freshness; Butterfield helps take that all an extra step. His turn is a little more understated and quiet than the majority of child actors; some might criticize it as “flat” or “stiff,” but part of me thinks that one of his primary functions — to act as an audience’s entryway into the events — would be undercut by showy scenes and some huge, overly-poignant “a-ha!” moment. Moretz is in the same boat, despite playing something of a supplementary character; Isabelle is mainly there to help Hugo along on his journey. She’s good (you even forget that Moretz isn’t actually British), if only a bit small in the overall picture.

Cohen is more or less playing a substantially tamer version of his typical bumbling fool, but I find that funny, anyway. Otherwise, he actually has a nice, cathartic moment toward the end. It isn’t going to win him an Oscar or anything — it’s, again, a moment — but Borat, Bruno, or whatever characters he’s made his name with completely disappear at that time. If anyone steals the show, however, it’s Kingsley. I don’t want to go into the specifics of his character — even if marketing materials have probably told you who he is by this point — but he’s playing a man with so much history, so much sadness, so much complexity. There are moments when Hugo threatens to lose itself in the stunning period detail and beautiful cinematography, but any moment he’s onscreen — particularly in the third act — snap any missing pathos back into place.

Some of Hugo‘s subplots could be cut, a little restructuring wouldn’t have hurt, and I wish we had more time to spend with Kingsley — but that’s all nearly irrelevant. This movie is alive, and it hit me harder than nearly any other from this year. I actually found myself on the verge of tears during the film’s big reveal, realizing that I was watching one of my favorite filmmakers — and a man who loves cinema more than most who have ever breathed — salute the craft that’s allowed him to create outstanding works of art for nearly half a century. You know what that is?