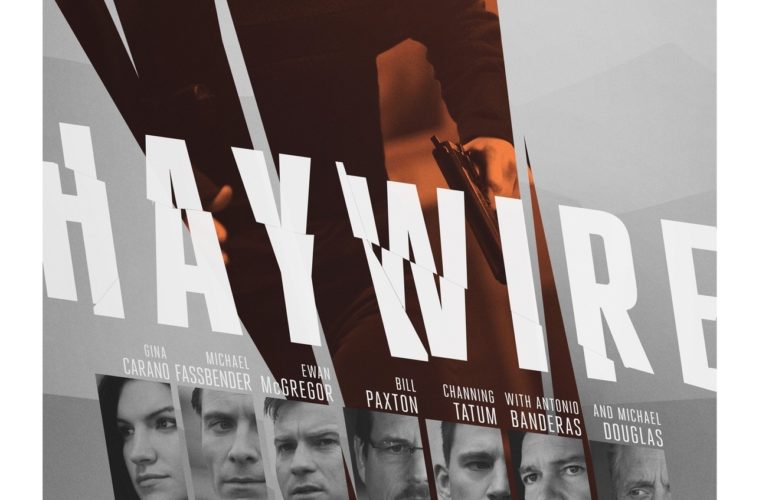 There’s a scene about 75 minutes into Haywire in which Aaron (Channing Tatum) feels that some crucial information has been withheld by Kenneth (Ewan McGregor), leading the two men to an argument – all whilst a killing machine (Gina Carano) is taking out their companions one by one in the same house. It’s a seemingly minor moment that, only upon the film’s conclusion some ten swift minutes later, you realize encapsulates the film entire: funny, quick, tension-filled, and to-the-point, but not at the sacrifice of formal skill and auteurism.

Admittedly, the skeleton of Lem Dobbs’ script would – like the work he did for Steven Soderbergh on the director’s best film, The Limey – fit in with many direct-to-DVD features. It goes likes this: Contract-based soldier Mallory Kane (Carano) has been hired by the government to rescue a hostage in Barcelona. Things doesn’t go as planned; some people get killed; she leaves the group; some old contacts come after her; Mallory has to kick their ass; she proceeds to do so; roll credits.

What elevates Haywire is, true to Soderbergh’s proclivities as a filmmaker, the process through which everything unfolds. Yes, I’d put most movies with that plot trajectory in a junk pile – but almost none of them feature some of the finest fights from any American action film this side of the new Millennium, or jazzy sequences that, typically, we only see during the robbing of a Las Vegas casino. Yet those physical actions don’t “look” or even “sound” the way we’ve become accustomed to. There aren’t quick cuts, tight shots, or (thank Christ) overbearing music cues to characterize or hinder the sight of Michael Fassbender being choked to a red-faced mess with a woman’s legs wrapped around his neck. A traditional filmmaker such as Soderbergh being given the reigns means that action and edit – or, contact and cut – become intrinsic to one another; but it’s only able to really work when the meat of it is simply structured, professionally framed, and, yes, well performed.

Like The Girlfriend Experience, Soderbergh is taking a big risk by placing a non-actress into the fray of things – except, in this instance, it’s a studio picture that millions will end up seeing, not an art house feature with cultural subtext. But it basically pays off; a few of Carano’s line readings and facial tics don’t fully register – certain moments gave me a sensation similar to watching myself in a high school video project – but, as was the case with Sasha Grey, you only need to buy the idea that this woman can work in her respective field. Hence, that’s why he and Lem Dobbs were smart to build this movie in their specific fashion; when your opener is punctuated with Carano wrestling Channing Tatum to the ground in an oddly beautiful, almost ballet-like singular movement, you can’t help but be sold from the outset. (If only because Mallory becomes truly terrifying.)

Everyone else in the cast – i.e., the professional actors – are smart to play it low-key so as not to cloud Carano’s limited range. McGregor, Fassbender, Michael Douglas, Antonio Banderas, Michael Angarano, and even Bill Paxton or Tatum could send her to school if they really flexed their acting muscles in any scene, but everything is played at a certain register wherein they – and the royal we – are on the same wavelength of hyper-reality.

Said wavelength is also consistent on a tonal scale, with a few humorous moments getting mixed in amongst the requisite action sequences – the latter of which even manage to subvert the genre a tad. I mean, how often do you get a chase scene that makes you question the basic wisdom of the hero?

A perfect example lies in the climactic moments of the Barcelona segment. It’s simple stuff: Mallory is running from members of a SWAT team, but there are decisions on her part that elicited a chuckle or three. Take the brief moments where, upon entering a building, she throws chairs down a staircase to slow down her pursuers, then kicks open a door to escape – but it’s made very clear that she only wastes time and leave massive road signs to her location. It’s so small and well ingrained into Haywire’s texture that I suspect many won’t even take notice, but, for yours truly, it came across as a lark on the part of Soderbergh and Dobbs. It’s at this point where I’m a little worried that I’ve oversold Haywire to a certain extent, since there are a couple of aspects that fall flat. For one thing, I still can’t fully get behind Soderbergh’s digital cinematography (if you didn’t know, Peter Andrews technically isn’t real,); a celluloid lover might always have some resistance to the format – I suspect this is ultimately true – but any bias doesn’t prevent me from taking note of low lighting or over-exposed environments that give much of the film a slightly cheap aesthetic. Just compare the hotel room scenes with similar ones in, say, Ocean’s 11. There’s no comparison, really.

And while I liked Dobbs’ bare bones template – which let the action scenes play out kinetically and loosely – his stabs at something a little bigger with a first-half flashback structure felt clunky and unneeded. Angarano is a fine young actor who I’m happy to see get good work – but I don’t want to think “We’re back to here again?” every time he shows up onscreen. (I will concede that it allows for a hugely funny, long-take gag involving the rear window of a moving car — even though they could have found a different way to incorporate this.)

Yet I suspect those qualms – one of which is rooted in frustration over not knowing where we’re headed – will melt away on (already desired) repeat viewings. I got such a good feeling from seeing Haywire, knowing that Soderbergh can still kick back and deliver good old fashioned entertainment when he’s given proper material; what’s more, it’s also the first time I’ve been dreading the oft-discussed hanging of his proverbial hat. But there’s a certain satisfaction in knowing that, when he’s on a sabbatical over the next few years, we’ll look at one of Soderbergh’s last as one of his best.