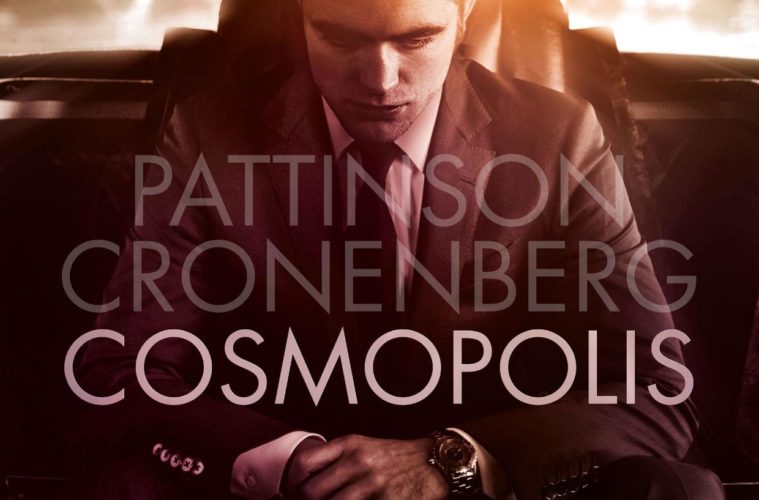 There are about a million places you could start with this thing.

Oh, hell: “Brilliant.” Cosmopolis is certainly a brilliant film, one filled with all the subtext and qualities we call “cinematic” that you could ask for, but it presents this in a manner so deceptively simple it can only feel like genius. David Cronenberg’s newest effort says inordinate amounts about our society, often, by saying so little, to the point where it feels as though we, the modern audience, are looking into a funhouse mirror only two degrees off from being an exact portrait.

And that’s more terrifying than anything the Canadian auteur has ever put onscreen.

More unsettling, yet, is Cosmopolis’ insistence on what truly constitutes time. Everybody here is moving, everybody is going toward something, everybody is trying to get away from something, yet they’re not reaching anywhere. Cronenberg’s world is one in which time is an inevitable, unstoppable, horrible form of forward momentum which everyone is consumed by with every passing (nano, zepto, centi) second. Whether we’re inhabiting a 20-foot vehicle on the way to a barber or marching in a funeral procession, there’s no real difference; it’s only taking us one step closer toward the end.

Not that you’d get it from the basic “plot,” as it were, in which billionaire Eric Packer (Robert Pattinson) decides he needs a haircut. Nothing about his upper appearance would suggest such work is even necessary — heck, his hair is practically short — but he needs one, and he needs to get it at a specific place. With his loyal guard (Kevin Durand), he sets off into the Manhattan streets; the slow collapse of society is just an obstacle to drive through.

That’s because our protagonist is fazed by almost nothing — anarchists defacing his limo, a plummeting corporate stock, professional pranksters (Mathieu Amalric) throwing a pie in his face — except for, in every instance, time. Cronenberg brilliantly drives this point home throughout (perhaps, admittedly, just a bit too much) in a twofold fashion: The language Packer employs to communicate feelings on the world’s condition — i.e., via hilariously empty platitudes which feel lifted directly from a stack of nihilistic fortune cookie inserts — and how he goes about this sprawling metropolis. The limousine, technology, clothes, sex, daily doctor check-ups, close-quarter business meetings, the security guard who provides updates best reserved for a high-ranking member of the government — these are all serving that main idea. They’re all an attempt to stay young, stay vital, stay “important.”

So much of this rides on Pattinson’s shoulders — the man is in virtually every scene — making it all the more fortunate that he’s got the character down to a T. On the page, Packer is a selfish and sociopathic lout that no one should have any right to sympathize with. He’s not much different when played by the heartthrob, so Pattinson makes a genius move: using his appealing physical image as something of a tool against whatever resistance an audience might otherwise raise toward his character. He’s terrible, but not much less charming and magnetic, and the thrill one gets from watching him — the very, very legitimate thrill — is only part of a weird collective shame on an audience’s part.

Seeing as that speaks for just about everyone else here, God help you if petty things like “relatable characters” matter as much as (gulp) narrative cohesion. Any provided consolation comes from one source: The soft, driving sound of Metric — in particular, the voice of lead singer Emily Haines — and the work done with Howard Shore to create a score which feels wonderfully serene and distinctly modern. There’s a certain cleanness to the sound which creates an impression that this, here, is our sole respite from a crumbling world. So, of course, it’s barely in the film. Sound like too much? Wait until you spend time with Packer’s associates, played in one-scene bits by an unlikely assortment of talents — Juliette Binoche, Samantha Morton, and Jay Baruchel being amongst the most notable. They come, go, and are never seen again; they either look very pretty or, moreso, very exhausted; every conversation in which they partake is built upon requests which can only be sussed out after, on average, three or four minutes of conversation that’s essentially beating around the bush; and, no matter the result of such visits, there’s never a true sense of satisfaction with what comes forth.

Words of seemingly great meaning add up to so little in Cosmopolis, and it’s frustrating as all hell to watch — therein, however, do we have the film’s pulse. If one is willing to let things drag out with bizarre rhythms of dialogue, comedy so deadpan most won’t even take notice, and so on — particularly in Packer’s wonderful conversations with his wife, Elise, played by Sarah Gadon as a whispery, wispy femme fatale — that feeling of mutual confusion is inexplicably hypnotic.

It’s all part of a larger, cumulative intent on the film’s part to conspire against Packer; Cosmopolis, upon close inspection, is really an artistic stab at the sorts who almost crashed the world economy and their unabated sense of living. Cronenberg drives this point home in a formal sense, employing a remarkable balance between screen space and written / spoken dialogue. His method of delineation comes by way of strategically aligned shot-reverse shot conversation in which actors, depending on the nature of their talk, either bounce off — i.e., stand in opposition to Packer — or bleed into one another on the occasion of mutual aspirations. (If it hasn’t been made clear yet, we’re getting much more the former than the latter.) Where words often confound, blocking and cutting make clear.

Cosmopolis takes its antihero to the only place he — or we, the observers — could ever really end up: a psychotic ex-corporate employee, played by an incredible, time bomb-like Paul Giamatti. Amongst the swindlers, beggars, freeloaders, killers, and destroyers, is this force of (moderately) controlled anger the closest thing we, as an society, have to some reasonable voice?

Maybe. And maybe, with his final moments, Cronenberg is sending a message this reviewer doesn’t want to stomach: It’s Eric Packer’s world, and we’re only allowed to enter that stretch limo — that disgusting sign of wealth and corporate excess, that vector which carries his existence like a disease — when the opportunity strikes. Do something about it before the passing centiseconds crush us into nothing.