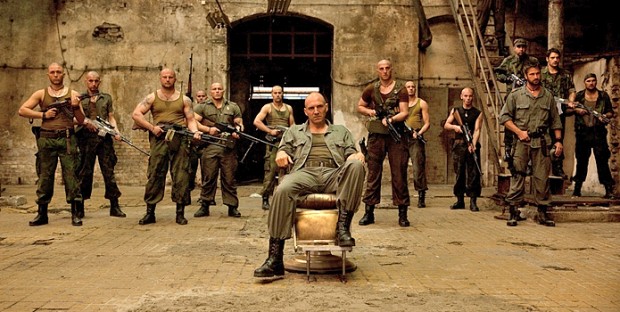 Americans have lucked out. Even though the BBFC banned The Human Centipede II: Full Sequence in their home country of England, nothing is stopping Tom Six‘s opus from hitting U.S. theaters. As BoxOfficeMojo reports, we’ll be seeing twelve people, barbed wire, and, yes, sandpaper on October 7th from IFC.

Also landing a spot is Pariah, a film that played earlier this year at Sundance. Written and directed by Dee Rees, the film stars Adepero Oduye as a young girl struggling with her inner-city life, in addition to her sexuality. Not exactly light material, right? Well, it’s supposed to be quite good, and it’ll arrive on December 25th, courtesy of Focus Features. There will also be a showing at TIFF this month.

One last date that’s been set is for The Texas Killing Fields, the directorial debut of Ami Canaan Mann — daughter of Michael — that stars Sam Worthington, Jeffrey Dean Morgan, Jessica Chastain, Chloe Moretz, and Jason Clarke. Anchor Bay (who I forgot were still a company) will release it on October 7th, accodring to ThompsononHollywood (via ThePlaylist). My interest in the movie was initially quite high; the cast, the director being the daughter of one of my favorite working filmmakers, and the subject matter all sounded interesting. What we’ve seen of it looks kind of underwhelming, but I’m holding out hope that a good drama can be delivered.

Certain films have had their dates changed around, although only one truly feels like a big move. That one is Safe, an actioner that stars Jason Statham, Chris Sarandon, and James Hong, and is written and directed by Boaz Yakin. The story follows an ex-agent (Statham) trying to rescue a twelve-year-old girl who’s been kidnapped. While it seemed like Lionsagate would release it on October 28th, it’s now moving to March 2nd, 2012. Why such a long delay? I have no idea, but there is an upside to the date getting pushed: This movie seems to have been made a thousand times already, so you can just rent Taken or Man on Fire, and you’ll likely get the same experience.

A move that annoys me a little is Coriolanus, the Ralph Fiennes-directed (and starring) Shakespeare adaptation, which also features Gerard Butler, Vanessa Redgrave, Brian Cox and Jessica Chastain. The trailer made it look pretty thrilling, and I’ve heard good things from those who have seen it. But, instead of The Weinstein Company giving it to us on December 2nd, they’ll be opening it on January 13th, 2012, after an appearance at TIFF. The truth of the matter is that I probably wouldn’t be able to see it when it initially was supposed to come out, but I still have to wait a little longer. A bit of a bummer.

Any thoughts on this dates being set or moved around? Which of these are you looking forward to the most?