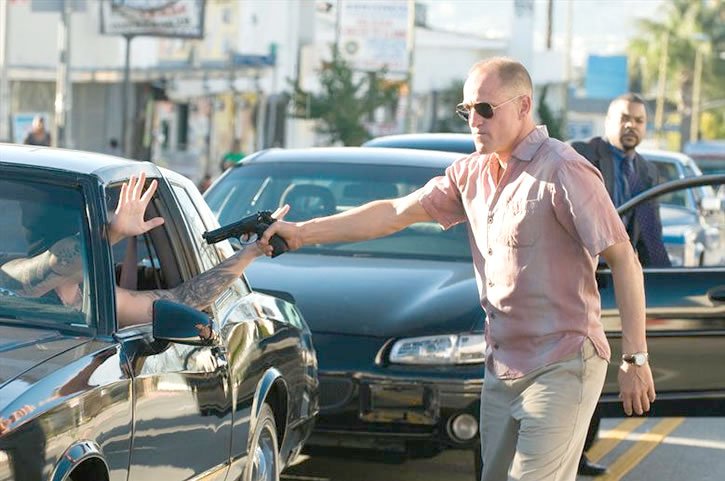 Oren Moverman‘s follow-up to The Messenger, Rampart, earned mixed reviews when it played at Toronto earlier in the month, but Millennium Pictures seems unconcerned with this. As THR tells us, the company has acquired the cop drama that stars Woody Harrelson, Ben Foster, Sigourney Weaver, Robin Wright Ice Cube, Steve Buscemi, and Ice Cube for around $2 million. The deal will see it get a release at the end of this year; an awards push for its lead seems possible, although theatrical reviews should have an impact on where they go with such a campaign.

The story is centered on a cop working in Los Angeles in the late 1990s — the title refers to the Rampart scandals of the time. Following him as his “past is finally catching up with him” in the wake of department investigations, he also has to deal with ex-wives, daughters, and superiors that might end his career. Jordan called the film a disaster when he saw it at TIFF, and I can kind of see how this would be the case when reading the descriptions. But, a good performance from Harrelson is something I’ll always be willing to see, so this is one I’m checking out. Plus, the script was co-written by James Ellroy; he’s not someone whose work you want to miss.

In the midst of the fall festival season, it can be easy to forget that studios will occasionally buy projects that aren’t first screened for critics in some part of the world that’s inconveniently out of my immediate reach. Two recent buys have come from DreamWorks and Warner Bros — the former, according to TheWrap, has picked up an adaptation of Roald Dahl‘s BFG, while the latter, so says Variety, has bought the rights to Murders and Acquisitions.

“BFG” is an acronym for “Big Friendly Giant,” and the story revolves around one that takes a British girl, Sophie, and transports her to his own land of giants. (Expect her to become American in this adaptation.) Kathleen Kennedy and Frank Marshall will be producing, while Melissa Mathison is adapting; she wrote a movie called E.T. With that out of the way, what I want to know is how they’ll be telling this story on film, since two previous adaptations of Dahl‘s books — James and the Giant Peach and Fantastic Mr. Fox — have been stop-motion, and that worked wonderfully. Personally, I would be absolutely thrilled if they went that route.

(Just to damper some of the happiness around this — there was also the mention of Brett Ratner‘s The 39 Clues ramping up for production; Steven Spielberg said that it would shoot next year, so it looks like he was right.)

Murders and Acquisitions, meanwhile, is the first project to be bought by Seth Grahame-Smith and David Katzenberg‘s joint venture, KatzSmith Productions. Jonathan W. Stokes wrote this dark comedy that “contrasts the world of high-stakes finance with that of high-priced hitmen.” The main character is “an ousted CEO,” who “decides to hire an assassin to kill the corporate raider who stole his company.” This isn’t his only script to catch attention, as another work, Blood Mountain, has been generating buzz around Hollywood. Even though it’s not a lot of information, the description sounds like it would fit my own interests in dark comedies and corporate satires, something that hasn’t been done very well since Burn After Reading.

How do these movies sound to you? Which are you most interested in seeing?