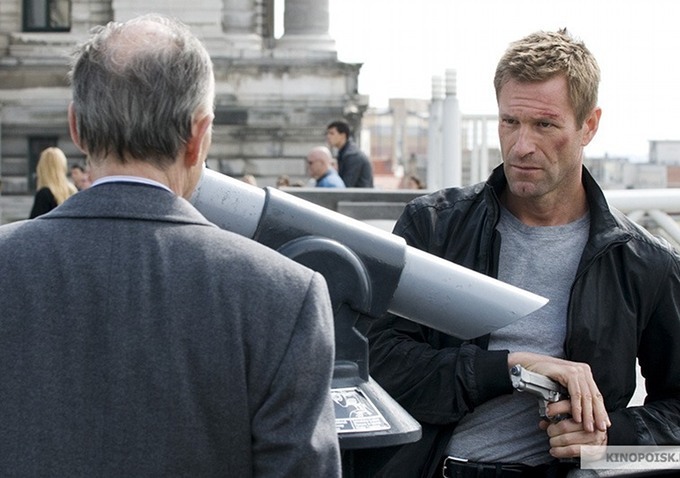 The Weinstein Company’s newest arm, Radius, have accrued a nice lineup following their recent inception, picking up the remake of Nicolas Winding Refn‘s Pusher and, more importantly, Winding Refn‘s own Only God Forgives. Moving outside territory pertaining to the Dane, Variety reports that they’ve just snatched rights to The Expatriate, an action thriller that stars Aaron Eckhart.

The picture sees DA Dent play a former CIA agent, forced on the lamb with his daughter (Liana Liberato) “when his employers mark them both for termination as part of a wide-reaching international conspiracy.” Olga Kurylenko will play an agent “assigned to track down [the lead], her former partner and lover.”

Philipp Stölzl (North Face) directed the film, which Radius co-president Tom Quinn lovingly refers to as “Bourne meets Taken.”  We can expect this one in the fall — via VOD and theaters — and if these new photos from Kinopoisk (via ThePlaylist) are any indication, we can expect Eckhart to get bloodied up while on the go. Further acquisition news comes courtesy of Deadline, who tell us that Sundance award winner Teddy Bear has found a home with Film Movement; the company will open it at New York City’s Film Forum on August 22nd, and then move on to other territories in the following weeks. Directed by Mads Matthiesen, the film centers on “Dennis, a painfully shy 38-year-old bodybuilder who lives with his mother, [and] sets off to Thailand in search of love.”

Are you looking forward to The Expatriate, based on these photos? How about Teddy Bear?