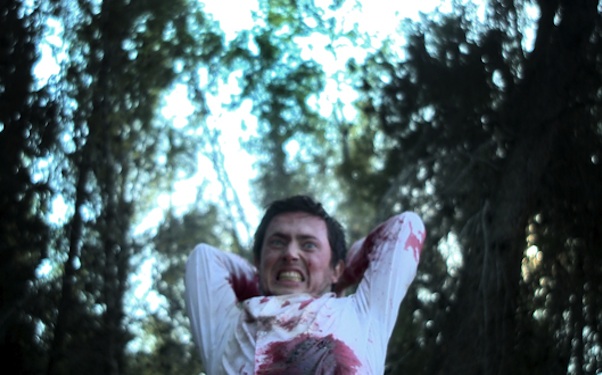 The only “straight” horror film I saw at this year’s Tribeca Film Festival (if you don’t count Jesus Henry Christ) was the Israeli offering titled Rabies. Billed as the first horror offering to come from Israel, I found it to be a refreshing take on a familiar scenario. Have you ever seen teenagers end up lost in the woods, only for them to be picked off one by one? Of course you have. This, thankfully enough, manages to make things a little different.

You might not be able to get that from the trailer, though, which has appeared at TrailerAddict. The big problem is that the interesting structure can’t really be communicated through a two-minute piece of marketing that needs to sell the audience on some of the scary moments, and doesn’t have time for much else. Some of the nice direction (and my favorite shot) are displayed — however, most of the people who they’re trying to appeal to here don’t care about such a thing. If anybody who watched this thought to themselves that it just looks like a generic horror thriller, I can promise you that is not the case.

Plot: A brother and sister in their twenties, run away from home after their dark secret is discovered. They find temporary refuge in a deserted nature reserve. When the sister falls into a hunting trap, set by a psychotic killer, the brother sets out in a race against time to rescue her. A forest ranger and his old dog, two apathetic cops, four tennis players and a murderer, wandering carefree amongst his traps, will all be gradually drawn into a whirlwind of misunderstandings, fears and violence.

Directed by Aharon Keshales and Navot Papushadoclever, Rabies stars Ofer Shechter, Ran Danker, Yael Grobglas, Ania Bukstein, and Danny Geva Lior Ashkenazi, and is expected to see a release by the end of this year.

What did you think of this trailer? Does it make you interested in another horror movie of this type?