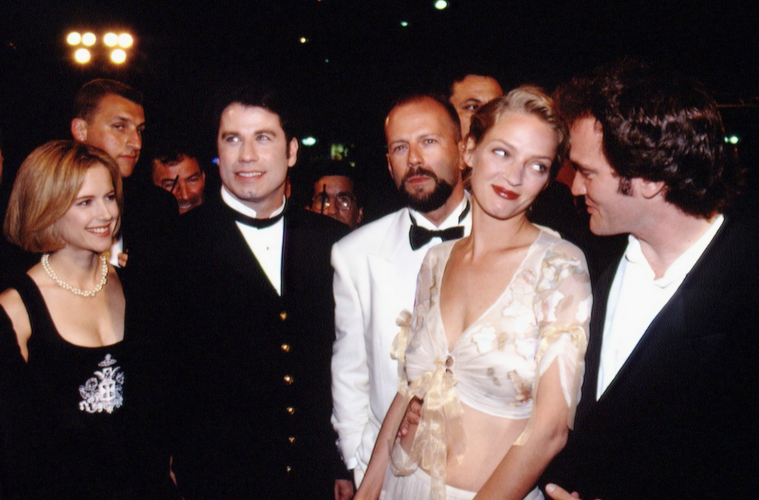 History was made twenty years ago today — or, perhaps, a piece of history began, as might be more accurate to say. On Saturday, May 21, 1994, a film premiered at a special midnight screening which Miramax had organized at Cannes’ Palais des Festivals. Mere days later, it would win the Palme d’Or. Some six months afterward, it premiered in the United States. Two decades out, Pulp Fiction remains the most influential film of its time.

The mass scope of a post-1994 landscape being kept fully in mind, I don’t know what even comes close. There are certainly films which left a bigger impact on the medium’s technological development — heck, the picture’s alternately ‘luminous and hyper-grainy 35mm photography is incredibly antiquated by now — but none, not one, has left its imprint like Quentin Tarantino‘s masterpiece, the film that has bred more cinephiles than any other and the one which sent an entire generation to film school. And it remains a masterpiece, no matter how many unconscionable imitators emerged in its wake, no matter how many select moments have been pastiched — really only a select few from a 154-minute work that doesn’t waste any of its own moments — and no matter how long its had to sit amongst the canon.

Tarantino was first introduced to the mass of unsuspecting Americans on Charlie Rose, in 1994 making the first of what would become a tradition: a problematic interviewer and potentially catastrophic interviewee harmonizing rather beautifully, in these 50+ minutes nevertheless setting an unstable image that the brilliant artist will likely be known by until his final breath. Academic discourse on the film and his larger oeuvre has, to some extent, thus been troubled — many continue to think of the Kangol-sporting writer-director as no more than an overzealous peddler of screen violence; that it couldn’t be further from the truth is sometimes impossible to communicate — but there’s a fine video essay for you to take in on this day, too. The study is significant, in less than eight minutes reconfiguring some of this writer’s (one who’s seen Pulp Fiction more times than he can count) views of the film.

From one of our contributors, Peter Labuza, and Matt Zoller Seitz:

Do you remember seeing Pulp Fiction during its original theatrical release?