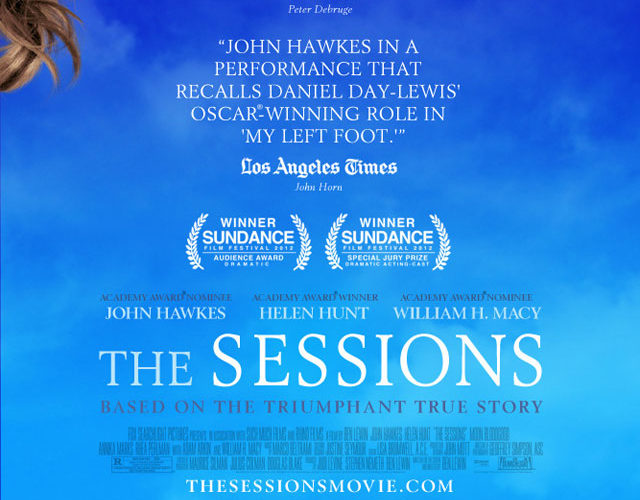 Posters for Sundance Titles ‘The Sessions,’ ‘Sleepwalk with Me,’ and ‘Goats’ Sundance 2012 is long gone, but its Fox Searchight-like spirit lives on. The first wave of its films have already started to hit (Beasts of the Southern Wild being the most notable example), and the promise of this year’s future critical darlings can be found right here, right now. We’ve got posters, is what I’m trying to say.

The first is for The Sessions (formerly The Surrogate), a drama starring Sundance mainstay John Hawkes, hey-remember-her Helen Hunt, and William H. Macy. Ben Lewin is behind the film, in which a dying man decides he wants to lose his virginity before passing on — for this, he hires a surrogate to train him in the art of physical bonding. Some of it sounds a little dreary and Oscar-y, personally, but our review claims there’s something much more emotional, genuine, and human to be found in the “tender, affecting portrait.” Hawkes‘ legitimate chances at a Best Actor nomination notwithstanding, of course.

The Surrogate enters a limited release on October 26th; I’d expect this to expand soon after. See the poster below (via HitFix): Next up, ThePlaylist have premiered a one-sheet for Mike Birbiglia‘s acclaimed Sleepwalk with Me. This semi-autobiographical story of a comedian struggling with both a stalled career and bouts of sleepwalking — I know it sounds familiar — was one of our favorites of the festival; it’s not just plain old funny, but also has something “undeniably true and heartfelt” at the center.

Sleepwalk with Me will open on August 24th. The poster can be viewed below: Finally, there’s Goats. This title snuck under the radar during its time in Park City, but for good reason: the general reactions to it were none–too–positive. David Duchovny, Vera Farmiga, Ty Burrell, and Keri Russell star in Christopher Neil‘s film — an adaptation that Mark Poirier adapted from his own novel — about the strains put on a boy when he has to balance his New Age mother’s life with the more modern characteristics of his father’s existence. From there, things are said to get very Sundance in the worst way possible.

Goats‘ opening will occur on August 10th. Take a look at the poster below (via Fandango): Do you plan on seeing any of these films? What do their posters say to you?