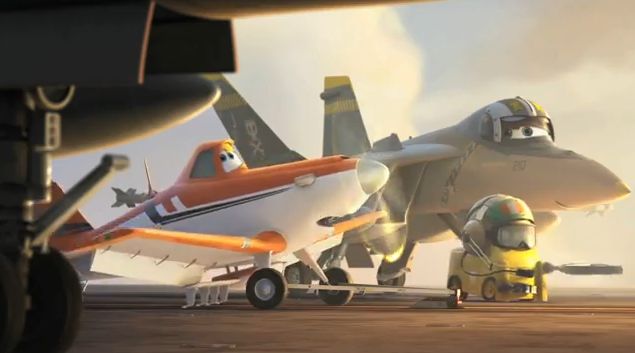 “From above the world of Cars and below the bottom of the animation barrel.”

Have you ever seen a friend descend into a bad, dangerous lifestyle, no matter how much you wanted them to go back to their old selves? It’s an awful, startling thing to see, and I hope that anybody reading this doesn’t ever have to experience it.

Unfortunately for Pixar fans, this is something that they will have to see, with the release of Cars 2 looking to be their first big step in the wrong direction. Where that wrong step may take them off a cliff is with Planes, their direct-to-video movie set in the world of… look at that, Cars!

We heard about this back in February, but now a trailer has shown up (via /Film). I would say that it looks like the worst thing they’ve ever put their name on, but their name isn’t even on this thing. What should read “Disney-Pixar” above the title only says “Disney,” which indicates to me that this isn’t something they want to be associated with. While it’s said to have been produced by Disney Toon Studios, do you think they wouldn’t put their name on this if it looked any good?

Watch the trailer below, and get a good laugh at the shameless greed of a multi-billion dollar company:

PLANES will introduce an entirely original and hilarious crew of daredevils from every corner of the globe and draws inspiration from the immensely popular Disney/Pixar’s CARS world.

“We had such a great time exploring the world of ‘Cars’ over the course of two films, so it seemed only natural for us to see where our imaginations would take us in a film where planes were the main characters. By expanding the Cars world, ‘Planes’ gave us a whole new set of fun-filled situations and a great opportunity to introduce some fantastic new characters,” commented John Lasseter, Chief Creative Officer, Walt Disney and Pixar Animation Studios.

“The team at DisneyToon Studios has done such an amazing job creating a heartfelt story filled with great comedy, adventure, and emotion. I know audiences are going to love taking off into the wild blue yonder with these daredevil characters, as they experience a whole new kind of animated adventure.”

PLANES takes off with an international cast of the fastest air racers around, in a comedy packed with action and adventure starring Dusty, a small town dreamer who longs to enter the most epic around-the-world air race … despite his fear of heights. With the help and support of a fleet of new and hilarious characters, Dusty wings his way into the biggest challenge of his life.

Is this of any interest to you, or do you think that Pixar has reached their lowest point?