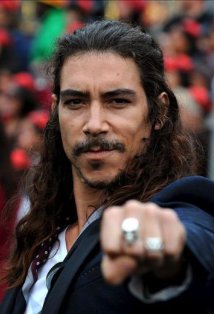 Oscar Jaenada hit it big last year when he nabbed a role alongside Johnny Depp for Pirates of the Caribbean: On Stranger Tides and he’s now finding his way to some larger roles. Variety has just reported that the Spainard will be joining Marcia Gay Harden for the indie drama, The Librarian.

Jaenada will be playing the role of the “wounded lothario” who takes Harden‘s “equally wounded” librarian on an excursion through Costa Rica. Juan Feldman will be making his feature directorial debut for the project, with a script from Joel Silverman. Both have had some experience on various shorts over the years, some of which they have teamed on – Surf School and Death to the Supermodels to name a couple.

Feldman stated the following about the project, “The Librarian is a beautiful tale of a wounded woman a very flawed man who form a sweet and unlikely bond.” Jaenada will be keeping pretty busy in the coming months, as he will be starring in Hands of Stone alongside Usher and Robert De Niro; as well as Carlos Saura‘s 33 Dias with Gywneth Paltrow and Antonio Banderas.

The Librarian shoots this month in Costa Rica.