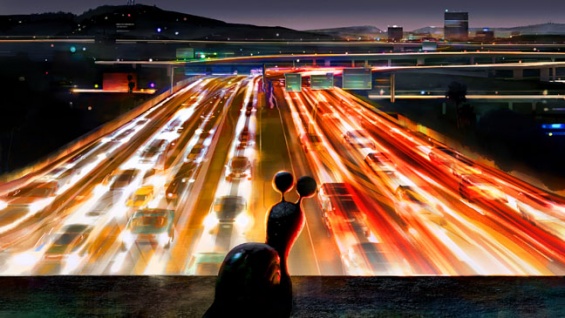 You’ll have to excuse me for not keeping tabs on a DreamWorks Animation project led by the voice talents of one Ryan Reynolds, but my own interest in Turbo has gone up a good deal with just one story. According to THR, the project has rounded out its cast with a bevy of talented names — Paul Giamatti, Michael Pena, Luis Guzmán, Bill Hader, Richard Jenkins, Ken Jeong, Michelle Rodriguez, Maya Rudolph, Ben Schwartz, Kurtwood Smith, Snoop Dogg, and Samuel L. Jackson. (And Samuel L. Jackson!)

David Soren will direct the film — written by Robert Siegel (The Wrestler, Big Fan) and Darren Lemke (Shrek Forever After) — which centers on “an ordinary garden snail (Reynolds) with dreams of racing greatness, [and whose] obsession with speed and all things fast has made him an oddity and outsider in the slow and cautious snail community, [as well as] a constant embarrassment to his careful older brother.” After being “imbued with the power of amazing speed,” our lead gastropoda “embarks on a quest that will see him racing in the Indianapolis 500.”

A little rote and overly-familiar when laid out so plainly, but even a big-budget animation cynic like myself (this is not a real thing, by the way) finds himself charmed by the cast, and at least one half of the writing team. So, much to my own surprise, Turbo could prove to be a fun CG time when it hits on July 19th, 2013.

Has this round of casting convinced you that Turbo might be something special?