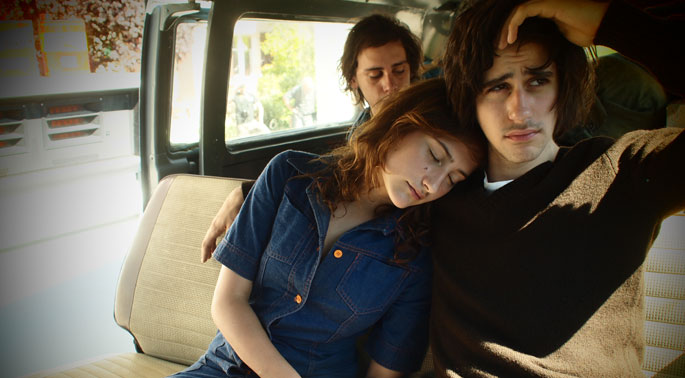 After Venice and Toronto unveiled their strong assembly of titles, the 50th annual New York Film Festival have released this year’s primary lineup. Short answer: We won’t be left out in the cold this fall.

Though not necessarily on the same massive scale as last year, the Film Society of Lincoln Center look to be offering some of world cinema’s finest options for 2012. The biggest title would, unquestionably, have to be Michael Haneke‘s Palme d’Or winner, Amour, while “the rest,” if you’re so callous as to call it that, include some of our favorite Cannes selections — including Abbas Kiarostami‘s Like Someone in Love, or Leos Carax‘s Holy Motors. Sure, maybe Beyond the Hills was a flat bore that didn’t live up to its director’s last effort, but at least I get to find out for myself.

Past those obvious picks, the selections topping my own list would have to be Olivier Assayas‘ Something in the Air and Brian De Palma‘s Passion. But, of course, that’s not all: We’ll also be treated to Noah Baumbach‘s mystery film, Frances Ha, some Alain Resnais, Hyde Park on Hudson, and a few titles whose simple existence has eluded me up until now. I can’t wait to get back to Lincoln Center this year.

Amour (Michael Haneke, Austria/France/Germany)
Michael Haneke’s Palme d’Or winner of Cannes 2012 is a merciless and compassionate masterpiece about an elderly couple dealing with the ravages of old age. A Sony Pictures Classics release.

Araf—Somewhere In Between (Yeşim Ustaoğlu, Turkey/France/Germany)
Director Yesim Ustaoglu depicts with empathy and uncompromising honesty the fate of a teenaged girl when she becomes sexually obsessed with a long-distance trucker and the promise of freedom that he embodies.

Bwakaw (Jun Robles Lana, The Philippines)
A moving and funny surprise from the Philippines starring the great Eddie Garcia—and a truly unforgettable dog—in the story of an elderly loner going where he’s never dared venture before.

The Dead Man and Being Happy/El muerto y ser feliz (Javier Rebollo, Spain/Argentina)
A dying hitman and a mysterious femme fatale set off on an oddball journey through Argentina’s interior in this playful and unexpectedly moving reverie on love, death and the open road.

Fill the Void/Lemale et ha’chalal (Rama Burshtein, Israel)
With her first dramatic feature, writer-director Rama Burshtein has made a compelling, disconcerting view of Israel’s orthodox Hassidic community from the inside.

First Cousin Once Removed (Alan Berliner, USA)
Alan Berliner creates a compelling, heartfelt chronicle of poet and translator Edwin Honig’s loss of memory, language and his past due to the onslaught of Alzheimer’s. An HBO Documentary Films release. World Premiere.

The Gatekeepers/Shomerei Ha’saf (Dror Moreh, Israel/France/Germany/Belgium)
Six former heads of Israel’s internal security agency, the Shin Bet, discuss their nation’s past, present and future, in what will surely be one of the most hotly discussed films of the year. A Sony Pictures Classics release.

Here and There/Aquí y Allá (Antonio Méndez Esparza, Spain/US/Mexico)
After years in the U.S., Pedro returns home to his family in Mexico, but the lure of the north remains as strong as ever. A most impressive feature debut by Antonio Mendez Esparza.

Hyde Park on Hudson (Roger Michell, USA/UK)
Bill Murray caps his career with a wily turn as FDR in this captivating comedy-drama about the President’s relationship with his cousin Margaret “Daisy” Suckley (Laura Linney). A Focus Features release.

Like Someone in Love (Abbas Kiarostami, Japan/Iran/France)
Master Iranian filmmaker Abbas Kiarostmi ventures to Japan for this mysterious beautiful romantic drama about the brief encounter between an elderly professor and a young student. A Sundance Selects release.

Memories Look at Me/Ji Yi Wang Zhe Wo (Song Fang, China)
Song Fang’s remarkable first feature, in which she travels from Beijing to Nanjing for a visit with her family, perfectly captures the rhythms of brief sojourns home.

Night Across the Street/La Noche de enfrente (Raul Ruiz, Chile/France)
A final masterpiece from one of the cinema’s most magical artists, this chronicle of the final months of one Don Celso allows the late Raul Ruiz the chance to explore the thin line between fact and fiction, the living and the dead. A Cinema Guild release.

Not Fade Away (David Chase, USA)
The debut feature from The Sopranos creator David Chase is a wise, tender and richly atmospheric portrait of a group of friends trying to start a rock band in 1960s suburban New Jersey. A Paramount Vantage release. Centerpiece. World premiere.

Something in the Air/Après Mai (Olivier Assayas, France)
Too young to have been on the May ’68 barricades, a group of young people explore their options for continuing the political struggle in Olivier Assayas’ incisive portrait of a generation. A Sundance Selects release.

You Ain’t Seen Nothin’ Yet/Vous n’avez encore rien vu (Alain Resnais, France)
The latest from 90-year-old Alain Resnais is a wry, wistful and always surprising valentine to actors and the art of performance starring a who’s-who of French acting royalty.

Are you taken with this concoction of titles?