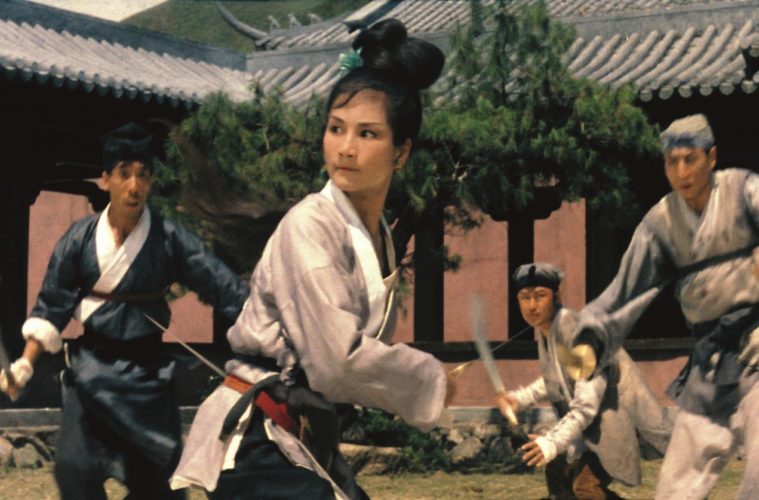 “Mizoguchi” wraps up with Princess Yang Kwei-fei on Friday (6/6) and The Lady of Musashino & A Woman of Rumor on Saturday (6/7). Sunday brings a double-feature of Tales of the Taira Clan and Women of the Night.

“See It Big! Science Fiction (Part Two)” gets underway with Metropolis on Saturday and Forbidden Planet on Sunday. The world’s best film company is celebrated with “Carte Blanche: MK2.” Friday (6/6) starts with Blow for Blow (directed my Marin Karmitz himself and Half a Life. Saturday (6/7) is a centerpiece, what with the offering of Kieślowski‘s Blue, White, and Red. The Tavianis‘ Father and Master plays alongside The Wall (not Pink Floyd) on Sunday (6/8).

For “On the Edge: Brazilian Film Experiments of the 1960s and Early 1970s,” The Red Light Bandit plays all this weekend, while a shorts program runs on Saturday and Sunday.

“All Hail the King: The Films of King Hu” brings sword and fist action to Brooklyn, beginning with Friday’s (6/6) showing of A Touch of Zen. The Love Eterne plays this Saturday (6/7), while Come Drink with Me is the selection for Sunday (6/8). All are on 35mm.

Also playing in the series, for some reason — as they say, “a fascinating Hollywood companion piece to King Hu’s Come Drink with Me” — is Nicholas Ray‘s Johnny Guitar, a.k.a. one of the best films ever made. To promote his new book, Five Came Back, author Mark Harris will introduce the Friday, 7:30 showing of The Best Years of Our Lives and the Sunday, 1:45 presentation of The More the Merrier. The former title plays through all this weekend.

Dark City plays under the “Future Noir” banner for midnight engagements this Friday and Saturday (6/6, 6/7).

Also on those nights and at those times, for “Nitehawk Naughties,” is the X-rated The Telephone Book.

Brunch screenings of Jurassic Park (for “ILM”) and Overboard (for “The Works — Kurt Russell”) are scheduled for Saturday and Sunday (6/8). Army of Darkness, Blue Velvet, and The Shining can all be seen in midnight engagements over the next few days.

At the opposite end of the clock, a 35mm print of Little Caesar can be seen.