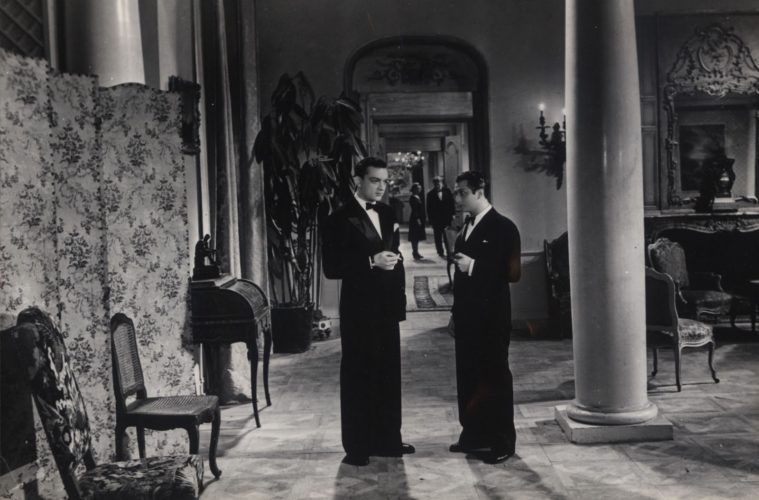 Sunday (3/3) forces viewers to choose between the works of Jean Renoir. Lincoln Center will screen The River at 1:00, while BAM are pulling out their big guns with The Rules of the Game at 2:30. Since both are on 35mm, there truly is no wrong pick. Also adding to the “Rendez-vous” are the IFC Center, who present Renoir’s Boudu Saved from Drowning on Saturday (3/2) afternoon. Consider that option when looking at the proper details.

Returning from last week, and showing around the same time, is Jaws, because you can’t really have a bad weekend when you see Jaws in the theater. If you missed it the first time around, Friday (3/1) and Saturday present another chance; on a similar note, James Cameron’s Aliens will arrive on those same days for midnight presentations.

Friday, Saturday, and Sunday (3/3) continues the theater’s John Ford retrospective, now with a print of his 1935 Edward G. Robinson-starring comedy The Whole Town’s Talking. This weekend’s “Scary ‘70s” debut is Wake in Fright, a long-lost, thoroughly uncompromising Outback-set thriller. Arriving on Friday and Saturday at midnight, tickets can be bought by clicking here.

Take the subway into Astoria, Queens for a weekend of Park Chan-wook, South Korea’s best-known auteur who, making an English-language debut with Stoker this Friday, is being celebrated by the group.

Things commence Friday night (3/1) with Oldboy; Saturday (3/2) starts off with a series of short films, then wraps up when J.S.A.: Joint Security Area shows in the evening; Sunday (3/3) wraps up his Vengeance Trilogy by presenting Sympathy for Mr. Vengeance, followed by Lady Vengeance.

Tickets can only be acquired when visiting the museum, and they’re handed out on a first-come, first-served system. The final weekend of Film Forum’s “1933” starts on Friday (3/1) with a double bill of I’m No Angel and Ecstasy, both running on 35mm; Saturday (3/2) brings a triple feature of James Cagney pictures, as Picture Snatcher, Hard to Handle, and Lady Killer all screen on the finest format; Sunday (3/3) presents none other than King Kong, put together with Mystery of the Wax Museum. The gorilla feature also shows earlier that day, independently.

In the same selection, Friday afternoon makes way for Max Ophüls’ Liebeli; also in its own slot is controversial pre-code drama The Story of Temple Drake, coming that night.

Genre comes back to Brooklyn when Nitehawk Cinema screen the notorious Henry: Portrait of a Serial Killer on Friday (3/1) and Saturday (3/2), after midnight, to kick off “Chicago: The Second City on Film.”

Those who prefer getting up early to staying up late still have an excuse or two to visit Nitehawk – and with benefits that go past a movie, too. To commence the “Country Brunchin’” lineup, they’ll play 1993’s Tombstone this Saturday and Sunday (3/3), a showing proceeded by live musical performances, as well as servings of unhealthy-but-delicious food. Admission is up for grabs right now.

Friday (3/2) and Saturday (3/3) at midnight, come face-to-face with the man that would risk his neck for his brother man, the cat that won’t cop out when there’s danger all about: Shaft.

Also making a midnight Saturday appearance is Tommy Wiseau’s The Room, a work that should require no introduction – and, if still unseen, absolutely demands viewing. Purchase admission at your own risk.