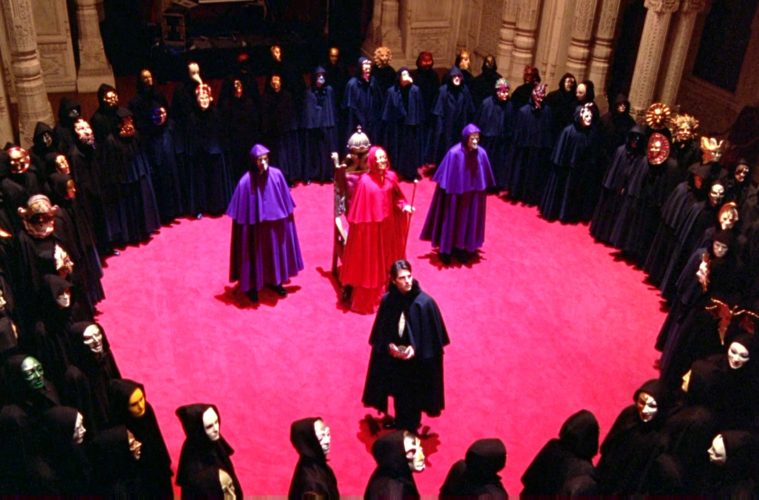 This theater is taking the cake for our latest installment, thanks in large part to their week-long retrospective on the films of Stanley Kubrick. Today and Saturday (3/23) presents 2001: A Space Odyssey; also appearing on those days is The Shining; his “official” feature debut, Killer’s Kiss, plays today on 35mm; there’s a Friday midnight showing of A Clockwork Orange, which will make another appearance on Saturday night. Then there’s Sunday (3/25), which is the most packed 24 hours of this entire retrospective.

First in the day is Lolita, followed by a print of his noir classic, The Killing; once that’s over, you can swing into Dr. Strangelove, then end the night with a 35mm presentation of Eyes Wide Shut. More information about the entire series, an altogether thrilling set, can be found by clicking here.

Somehow, this is not all the weekend has in store. They’ll also screen Top Gun on Friday and Saturday at midnight, on both days following some 20 minutes after the continued run for Raiders of the Lost Ark. And, fifteen minutes before the latter, you have a chance to see the most visually stimulating entry on this entire list: Alejandro Jodorowsky‘s The Holy Mountain, a work you’d be a fool to pass up. (Its 35mm engagement should only be extra incentive to take the plunge.) A little later in the night is a print of Alfred Hitchcock‘s late-era classic, Frenzy, which I’d advise you make a movie date.

Making their own case for the next couple of days, Film Forum are holding one-a-day screenings of Fritz Lang‘s M, which has been running there for more than a week now. If you’d like a dive into more unknown cinematic waters, take a chance on the restored cut of Michael Cimino‘s film maudit par excellence, Heaven’s Gate, whose lengthy rollerskate sequence should look even better on the big screen. But, if you want something more familiar and more comforting, it’s hard to go wrong with some Sunday (3/24) morning Young Frankenstein, making its appearance on celluloid.

Second only to IFC for the weekend, this lovely institution continue “A Tribute to Amos Vogel and Film as a Subversive Art” with Luis Buñuel‘s Viridiana on Saturday (3/23) and Sunday (3/24), Frederick Wiseman‘s Titicut Follies on the latter day, and a screening of three experimental shorts, including one by Yoko Ono, on Saturday. Almost all will screen with prints in tow, and further details are available at this link.

Adding some, pardon, trash to the equation is the final installment of their Harmony Korine tribute, Trash Humpers, whose Friday showing on 35mm almost feels like some weird joke. Even stranger, though, is Saturday’s presentation of Equilibrium, an entry into the “Fist and Sword” lineup of movies.

All screenings are free with museum admission, but are only available via a first-come, first-served system. One of Brooklyn’s finer choices in repertory excursions have a nice little slate for the weekend. Friday (3/22) at midnight is Tod Browning‘s Freaks, one of the few cinematic works that’s all but guaranteed to give you a couple of shivers. Also in the realm of the unusual is French genre master Jean Rollin‘s Fascination, which holds a Saturday (3/23) midnight showing complete with the live music of a New York City-based group, Morricone Youth.

Further adding to that pile will be Walter Hill‘s Streets of Fire, playing on Saturday and Sunday (3/24) afternoon for their series “Chicago: The Second City on Film,” as well as the “March Brunch” lineup. (That’s a villainous Willem Dafoe and steak & eggs for you in one sitting.) The rarest of their weekend opportunities is a late-morning presentation of the silent crime dramedy Chicago, coming to Nitehawk (both on 35mm and with live musical accompaniment) this Saturday and Sunday.

Coming Friday (3/22) and Saturday (3/23) at midnight is Orson Welles‘ Citizen Kane, which hey maybe you’ve heard of and could also be okay.

Last, but certainly not least — and, seemingly, one of this master’s few works that isn’t in the vicinity of six hours long — Jacques Rivette‘s acclaimed Le Pont du Nord will have celluloid showings throughout the week.