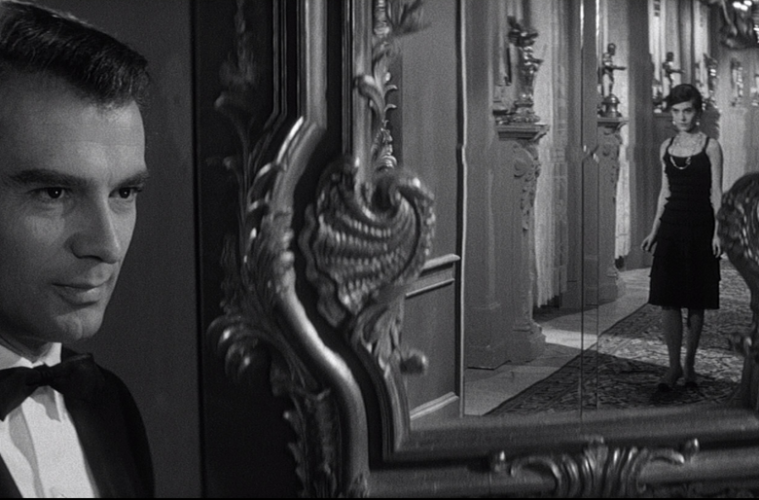 It’s a packed weekend, first and foremost with more Alfred Hitchcock. Prints of Notorious and Waltzes from Vienna screen this Friday (3/7), while Saturday puts, again, the 3D version of Dial M for Murder alongside Under Capricorn; on Sunday (3/9), one can enjoy a double-feature of The 39 Steps and The Lady Vanishes.

The repertory equivalent of a town bicycle, Andrei Tarkovsky‘s Nostalghia, plays throughout this week.

The Sunday-morning screening will be the Marx Brothers‘ classic, Duck Soup.

After his passing last week, Lincoln Center have done a wonderful thing and brought out a restored print of Alain Resnais‘s classic Last Year at Marienbad, to screen throughout the week. If you’ve never seen it and are in the area, there really, truly is no better way to experience this confounding pleasure. “Hotels on Film” takes place this weekend, bringing Barton Fink (preceded by Wes Anderson‘s Hotel Chevalier), Ingmar Bergman‘s The Silence, and Lost in Translation (preceded by Life Without Zoë) this Saturday (3/8). Sunday (3/9) brings Grand Hotel, Fassbinder‘s Beware of a Holy Whore, and The Shining, all of which play on film. Cruising and My Own Private Idaho (the latter a print) play as part of a James Franco retrospective, in this case providing a chance to see movies that are not his own.

The ’80s sex thriller Sliver is playing at midnight, if you’d like to sleaze things up alongside Cruising.

A print of Lynch‘s Lost Highway returns for midnight engagements this Friday and Saturday (3/7, 3/8), as part of a celebration of the great Angelo Badalamenti; The City of Lost Children is also expected to play in that same series this Saturday and Sunday (3/9).

At midnight those same nights and times is Xanadu.

On the opposite ends of Saturday and Sunday is a 35mm presentation of Splash.

A 35mm print of Miyazaki‘s Spirited Away will play Friday and Saturday (3/7, 3/8) at midnight.

The restored Umbrellas of Cherbourg plays on Friday (3/7).