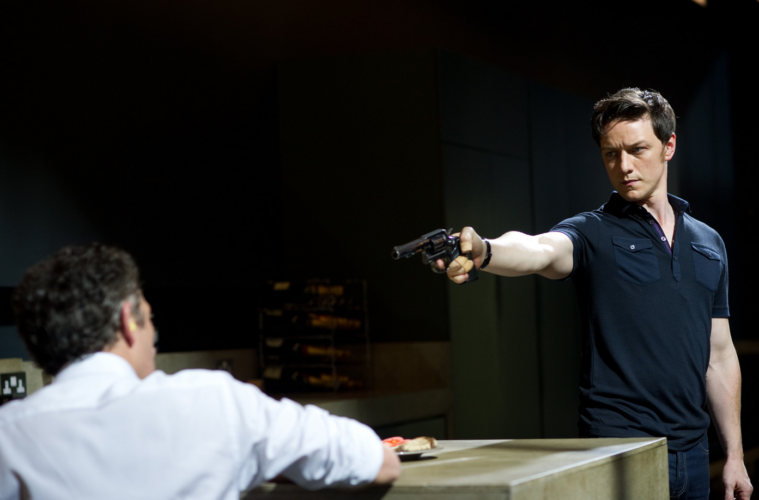 After winning his Oscar for Slumdog Millionaire, director Danny Boyle used his clout to take on less of a crowdpleaser with 127 Hours, but now he’s back to what looks to be more of his crime roots with Trance, a light heist thriller. While U.S. audiences have to wait until next month to see the film led by James McAvoy, Vincent Cassel and Rosario Dawson, those in the UK get it slightly earlier and now we’ve got the first batch of reviews, which are mostly mixed, with a few positives. Check out snippets of them below, along with a new green-band trailer, featurette and a handful of stills.

Peter Bradshaw at The Guardian:

It’s a movie with a witty and intriguing starting point and I wanted to like it, this being virtually my patriotic duty. But Trance is a disappointment: a strident, chaotic, frantically overcooked film with an almost deafeningly intrusive ambient soundtrack. There is some embarrassing, eyeball-swivelling acting from the male leads, and the elegance of the film’s premise is quite obliterated by its crude and misjudged violence.

A trippy variation on the dream-within-a-dream movie, Boyle’s return-to-form crimer constantly challenges what auds think they know, but neglects to establish why they should care. The pic’s flashy style, plus its stark violence and nudity, ought to transfix male genre auds. More of a conceptual exercise than a conventional film noir, “Trance” demonstrates Boyle’s determination to continue to overcome seemingly impossible filmmaking challenges.

A tricky thriller to discuss let alone critique – due predominantly to a plethora of red herrings and white rabbits – Boyle’s unapologetic nail-biter (nay, nail-remover) certainly lends itself to repeat viewings, particularly for its simmering exploration of Freud’s id, ego and super-ego via McAvoy’s ever-changing state(s) of mind. Whilst return trips to Trance’s wacky world of hypnotherapy may ultimately prove just as intellectually fruitless as the first, there’s still something undeniably addictive about being placed under this particular director’s cinematic, silky smooth spell.

Though it rings ever so slightly hollow as cool shades into callousness, this exercise in sexy suspense and brain-scrambling mystery is a dazzling, absorbing entertainment which shows off Danny Boyle’s mastery of complex storytelling and black, black humour.

The overriding impression is one of a game in which the narrative tricks and amped up pulse dominate over all other concerns. It’s as if the challenge the filmmakers set for themselves was not so much to tell a story as to discover how many clever and devious ways they could disguise and hide what’s coming, to the point that the subject seems to serve the style rather than the other way around.

Simon (James McAvoy), a fine art auctioneer, teams up with a criminal gang to steal a Goya painting worth millions of dollars, but after suffering a blow to the head during the heist he awakens to discover he has no memory of where he hid the painting. When physical threats and torture fail to produce answers, the gang’s leader Frank (Vincent Cassel) hires hypnotherapist Elizabeth Lamb (Rosario Dawson) to delve into the darkest recesses of Simon’s psyche. As Elizabeth begins to unravel Simon’s broken subconscious, the lines between truth, suggestion, and deceit begin to blur.