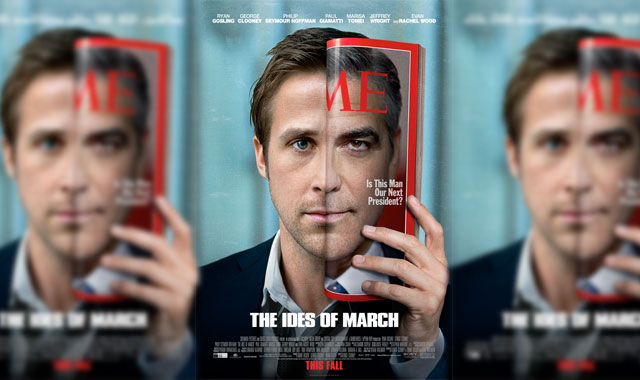 New Posters For ‘The Ides of March,’ ‘Twixt,’ and ‘The Muppets’ With it making a debut at Venice — and then showing up at Toronto right after — George Clooney‘s The Ides of March is slowly but surely creeping up on our radar. Starring Clooney, Ryan Gosling, Philip Seymour Hoffman, Marisa Tomei, Jeffrey Wright, Max Minghella, and Evan Rachel Wood, the political drama (based on Beau Willimon‘s play) sounds like it has everything we expect from this type of film: intrigue, mystery, and parallels to our own world. Gosling plays a press secretary who discovers information that could ruin his candidate’s (Clooney) presidential chances, and early word indicates that it should get some people riled up.

New images and a poster have appeared at USA Today and ET (via ThePlaylist), and while the pictures are standard stuff, the poster is pretty great. Showing off both of its stars in an obscured manner, it says so much about the movie through some simple imagery. If anything, it brings back memories of the fantastic Michael Clayton poster. Take a look at them above and below (with more images at the links), and see the film when it opens on October 7th: After that are a set of posters for Francis Ford Coppola‘s Twixt, which will also be playing at TIFF. The supernatural thriller, starring Val Kilmer, Ben Chaplin, Alden Ehrenreich, Bruce Dern, and Elle Fanning, is about a writer who investigates the murder of a young girl, whose spirit guides him along in his dreams. The movie has been catching a lot of people’s attention lately because of the unusual way in which Coppola will be showing the film, which you can (and very much should) read about here.

The new posters from Movielicious (via ThePlaylist) all show Fanning‘s character, V, who is the murdered girl. Earlier pictures didn’t play up a graphic aspect all that heavily, but these look like they come from a much more violent film than we might expect. I suspect that they’re trying to market this to a wider audience by playing up the horror elements, mainly due to the actual movie sounding weirder than something you might normally expect from the genre.

I picked two of my favorites to show below, as well as a new still, and two more can be seen at the links: Finally, a new, reportedly final poster for James Bobin‘s The Muppets has shown up at Fandango (via FirstShowing), which shows off Jason Segel and Amy Adams, a duo that the previous posters have tried to avoid. Of course, the main draw — the Muppets, that is — are still present. It would be weird to advertise The Muppets in any way without having the title characters appear, right? Chris Cooper is also listed, but not pictured, which is a shame; I want more images of him with fake, colorful creatures.

There isn’t much else to say other than “it looks nice,” so I’ll just quit blathering and let you see it for yourself. I will, however, remind you that it opens on November 23rd, which, look at that, the poster also says.

Anyway, see it below: What do you make of these new posters and photos? Which of these films are you most excited about?