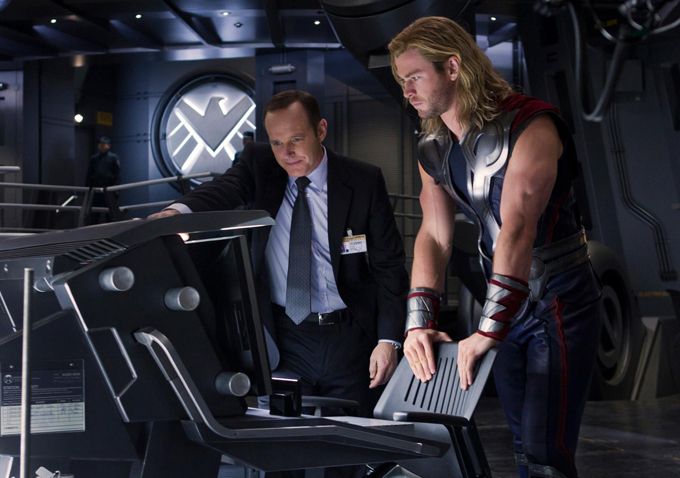 New Photos from ‘The Avengers,’ ‘The Bourne Legacy,’ and ‘Men in Black III’ Marvel is continuing their “let’s release an innocuous photo from The Avengers” streak, the latest two of which retain a certain mold, wherein the heroes either stand around or walk toward something that should look cool in actual movie. The above image, from the film’s Facebook page (via HeyUGuys) has Thor (Chris Hemsworth) and Agent Coulson (Clark Gregg) looking at a monitor; the picture right below, courtesy of Empire (via CBM) gives us Hawkeye (Jeremy Renner), Captain America (Chris Evans), and Black Widow (Scarlett Johansson) stridently striding. From director Joss Whedon, all this and more on May 4th. [ThePlaylist] Then there’s a new shot from my most anticipated Jeremy Renner-starring blockbuster of the summer, The Bourne Legacy. Although a scan of something from Empire (via CBM) doesn’t even barely equate with the stylish, promising teaser, it’s far more kinetic and suggestive than any single image released from The Avengers. Finally, Empire (via CBM) have one last batch of pictures to provide us, coming from Men in Black III. Whether we like it or not, the Barry Sonnenfeld sequel that no one asked for — or, one that six people asked for nine years ago — will be coming our way May 25th, and the marketing is only going to hit an influx before then. Our newest photos show off Will Smith and the Tommy Lee Jones-imitating Josh Brolin. Which is to say, none of this will change your opinion three months before the film comes out — even if Brolin looks like he’s having fun. Do these pictures have you salivating for some blockbuster fun? Which of these three are you anticipating the most?