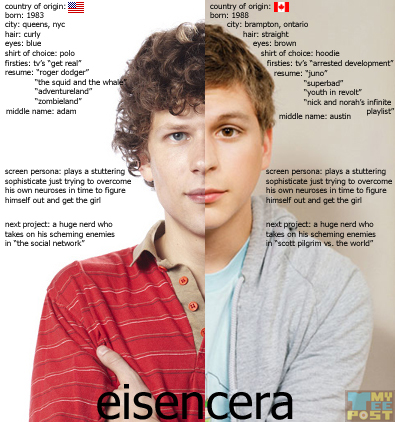 When you remember that Jesse Eisenberg and Michael Cera are the exact same person trapped in somewhat different bodies, it’s only right that we should bring you news on their (respective) endeavor(s) finding distribution. First up, we’ve heard, courtesy of Variety, that the former’s Predisposed — which served as the closing film of this year’s Sundance — has been picked up by IFC for an unspecified release sometime this year.

Philip Dorling and Ron Nyswaner (who we interviewed) helmed the picture, which centers on “a piano prodigy (Eisenberg) who must deal with his troubled mother (Melissa Leo) and a hapless drug dealer (Tracy Morgan) on the day he has an audition for a prestigious music program.” With the progression of the story, these “misfits faces the mistakes of the past, the challenges of the future, and the possibilities of love.” Comedy reportedly ensues, though reviews coming out of the festival were a smidge divided. Disappointing, as you could expect, but I think I’ll see it based solely on the fact that Eisenberg is kind of a big deal around these parts.

The other distribution news (or is it the same?) also hails from the land of Variety, who bring word that Sony Pictures Worldwide Acquisitions have bought all rights to a Sebastián Silva-helmed thriller, once titled Magic Magic. We told you about this one back in May, when the plot outline went a little something like this: “A girl vacationing with her friends in a remote area of Chile slowly starts losing her mental faculties; she tries to get her friends’ attention, but they ignore her until it’s too late.” Juno Temple takes the lead here, while Cera, Emily Browning and Catalina Sandino Moreno co-star as her friends.

Braven Films, Killer Films, Rip Cord Productions are all behind the project; filming is expected to begin shortly.

Who wins in a fight between Cera and Eisenberg? Do they simply form into one awkward, endearing being, as shown above?