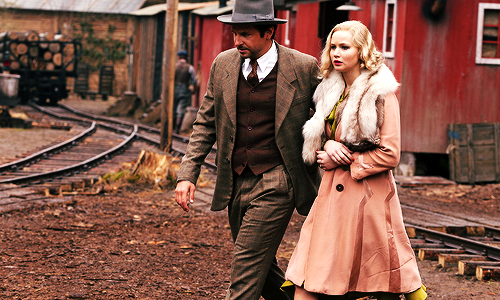 New Images of Bradley Cooper and Jennifer Lawrence In ‘Serena’ One of the biggest curiosities as of late in the land of Hollywood is the delayed release of the period drama Serena. Featuring a reteam of Jennifer Lawrence and Bradley Cooper, the film shot back in spring of 2012, but still is awaiting a premiere, as well as U.S. distribution. We last heard from THR that director Susanne Bier‘s 18-month post-production was recently completed, with a source adding, “There were no reshoots or anything like that. It was just a real precision edit because the story is about a woman’s descent into madness. And Susanne is a total perfectionist.”

We’ve finally got a batch of new images from the adaptation of Ron Rash‘s Depression Era novel, coming from production designer Richard Bridgland‘s website, as well as a Hunger Games fan site. Featuring new looks at our leads, as well as some of the locales, hopefully it’s a sign a premiere is on the horizon. One can check out the images above and below, as well as a synopsis for the film also starring Rhys Ifans and Toby Jones.