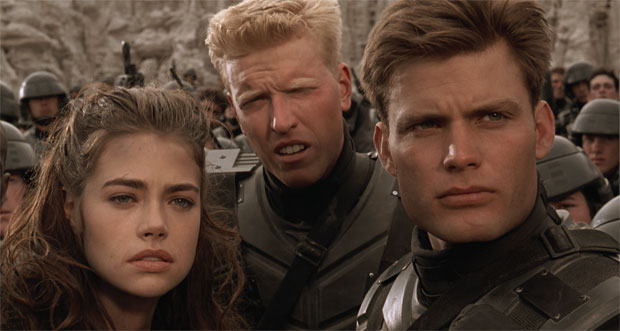 You’ll have to forgive me — it’s a little hard to type when I’m scratching my head — but Vulture informs us that, as you’ve read above, Fast and the Furious producer Neal Moritz will be producing a new take on Starship Troopers. This is confusing because, as you’re also surely aware of, Paul Verhoeven already adapted the novel into a revered sci-fi social parody… in 1997.

A director or stars haven’t been contracted, but screenwriting duo Ashley Edward Miller and Zack Stentz have been tasked to work with this material once more. Those are a pair of names to crop up in blockbusters a little recently; they were two of three scribes on Thor, and we also pretend they actually wrote X-Men: First Class.

Though everyone is labeling this a remake, it seems just as — well, actually, more — possible that it’s actually a second adaptation of Robert A. Heinlein‘s original novel, which Verhoeven‘s film deviated from greatly. (They could always use the source material as a reputation crutch — that is, if it’s actually a remake of the original, someone can pull out a paperback copy of the book whenever the comparison is raised as a defense.)

But no matter what they work with, the purpose behind doing this is absolutely eluding my own understanding. I may not love the original Troopers like so many others seem to — even if it’s a fun time — but it’s such a singular, unique work that anything similar to it would pale in comparison. There’s a reason nobody ever talks about those direct-to-video sequels, you know. I mean, it’s because they’re terrible, but imitating the 1997 film does it no favors.

Would you want to see a Starship Troopers remake/second adaptation?