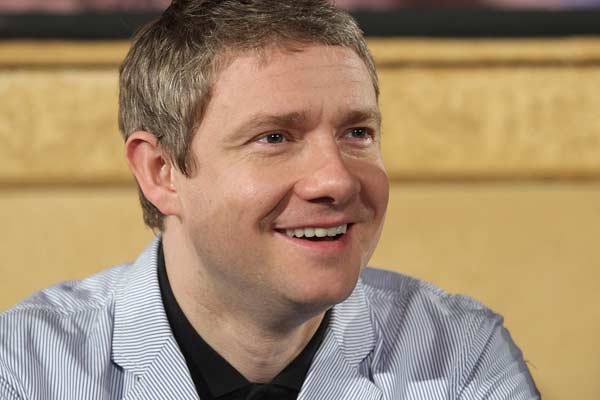 There probably isn’t much concern about The Hobbit‘s financial viability, nor is there a lot of contemplation on how it should affect Martin Freeman‘s career. If anything, the British thespian is showing signs of a normal trajectory — a big film here, some TV there (the excellent Sherlock, for one), and little films while he’s still at it. So, in a deviation from the world of J.R.R. Tolkien, Variety reports that the actor will be taking a small turn Svengali, a feature based on the YouTube series that follows “the story of a smalltown guy from Wales who travels to London to fulfill his dream of becoming the manager of the best band in the world.” Freeman‘s role is said to only be a cameo — shot during a break between the two Hobbit films — but his work is always welcome, anytime and anywhere.

The show’s co-creator, Jonny Owen, will be writing, starring, and producing, while the rest of the cast will be filled out by Michael Smiley (Spaced, Kill List), Vicky McClure (This Is England), and (like the original series) various music personalities. John Hardwick is making his feature debut, with production commencing next week.

A much bigger project has updated its roster, as Deadline reports that Kathryn Bigelow‘s Osama bin Laden picture has added Harold Perrineau (Lost) to the massive, amazing cast — in a secret role, mind you. The rest of his lineup includes Joel Edgerton, Jason Clarke, Édgar Ramírez, Mark Strong, Jessica Chastain, Nash Edgerton, Kyle Chandler, and Jennifer Ehle; taking into account what we know about the participation of those actors, it’s safe to go ahead and assume that Perrineau‘s got a role somewhere along the lines of a CIA agent or Navy SEAL. I’ll just be pleased to see him get some good post-Island work.

Have you seen the original Svengali series? Could a movie be made from that? Is Kathryn Bigelow’s bin Laden film looking impressive by now?