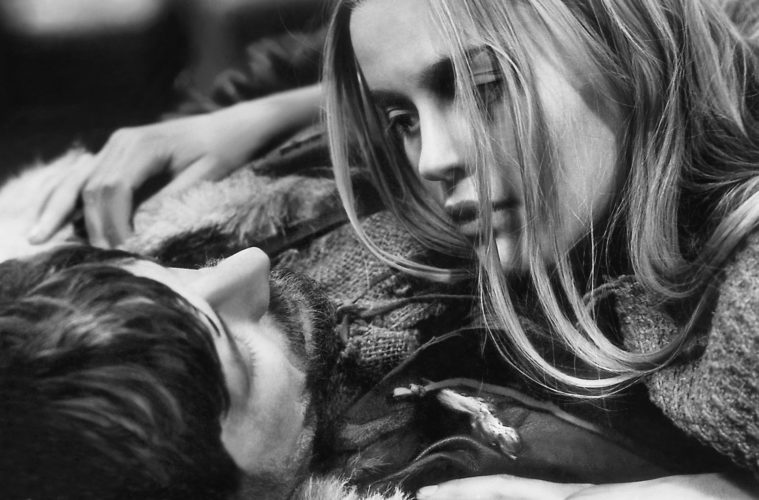 After a recent New York screening of František Vláčil‘s Marketa Lazarová, my friend and fellow critic, Vadim Rizov, tweeted the following response: “Sheep God war men snow church blood swords ‘old crone’ justice grass wtf WTF UNCLE.” He certainly wasn’t alone in such a confused response. Lazarová — now out on Blu-ray via Criterion — is often cited as the towering masterpiece of the Czech New Wave, but it would be disingenuous to call this film easily digestible. While some cinephiles might find the work of Terrence Malick or Andrei Tarkovsky “hard” and “difficult” to comprehend, Marketa Lazarová cannot even compare: in Tom Gunning’s essay on the film, he admits “it took me four viewings before I figured out the incidents of [the film’s] plot.”

Even if the film is difficult, however, the filmmaking itself is astonishingly radical and breathtaking; Vláčil’s aesthetic approach is audacious, even when compared to his contemporaries like Jean-Luc Godard, Miklós Jancsó, and Tarkovsky. Cited as an attempt to create “Film-Opera,” Lazarová‘s jarring editing patterns, constant change in focal / depth length, and unannounced shifts between objective & subjective points of view all make this work intensely baffling, but also compelling to watch — as if the director is reinventing cinematic language.

While I usually promote the idea one should go into films knowing as little as possible, Marketa Lazarová certainly stands as a major exceptions to that rule. Below, I present a primer for those curious enough to check out this truly strange and rarely seen work of world cinema.

What is Marketa Lazarová about?

Marketa Lazarová is about a pair of warring clans in 13th-Century Czechoslovakia: the pagan Kozlíks and the Lazars, who have recently converted to Christianity. Each possess a fortress — the Kozlíks living at Roháček and the Lazars inhabiting Obořiště. While these two groups occasionally engage in combat across the harsh winter land, the King’s army interferes after a Saxon’s son is kidnapped during the opening, and though all is told in one epic narrative, the film is, then, broken into two parts: Staraba the Werewolf and The Lamb of God. What is the basis for the narrative?

Vláčil’s film is based on a short novel by Vladislav Vancura (who was briefly a filmmaker himself) from 1931. It has only recently been translated into English (due out in September) because the use of Czech and wording therein has often been compared to James Joyce. (The novel was a success in its native country for what could be described as a postmodern style.) In an essay composed for the Criterion release, scholar Alex Zucker notes, “The narrator aims to get under his readers’ skin, chiding, mocking, questioning, as Vancura pursues his goal of jarring Interwar Prague’s bourgeois intellectuals out of their complacency.” In order to translate such narrative stylings to film, Vláčil and cinematographer Bedrich Batka rarely implement static shots — their camera searches as much as the language. The film is thus considered by many an excellent adaptation for avoiding a precise or clear understanding of narrative, instead focusing on tone.

Who are the major characters?

One difficulty presented by Marketa Lazarová is the large number of players involved in its drama. (Since most of the men have heavy beards, many of them blend together.) Characters enter and exit the proceedings without any particular rhyme or reason, and because the land and fortresses all blend together — the 1969 Film Quarterly review unrionically lauds the film by writing, “Nothing in it is charming or picturesque” — it can be hard to tell who is who. It’s best to start with the film’s two major female characters and their fathers: the titular Marketa, daughter of Lazar; and Alexandra, daughter of Kozlík. Vláčil delineates them along a virgin and whore dichotomy: Marketa (blonde, with skin color matching the snow) is prepared by her father to join the local convent, while Alexandra (dark black hair, her skin covered in mud) appears to be a schemer amongst her family.

Both take on lovers in the film, staring when Marketa is caught by the Kozlík’s son, Mikoláš. While he initially rapes her, the two later come to form a loving bond (though this isn’t made clear until very late in the narrative); Alexandra instead falls for the Saxon’s captured son, Christian. Besides these four, there is the army general, Captain Beer, Kozlík’s other son, Adam — a one-armed mute who causes mischief throughout the land — and Bernard, a monk who wanders through the second half of the film mostly as a passive observer of the war.

Many films from the Soviet block are quite political — can we say this is as well?

Yes and no. As Peter Hames describes it, one of Vláčil’s goals in making Lazarová was to “represent the psychology of a period.” Vláčil spent months attempting to make the look, tone, and feeling of the film as “accurate” as possible — in a way, to avoid something that just looked like a costume drama. Instead of researching the history he was presenting, the helmer studied groups of people who lived similarly to his 13th-century characters as a means of understanding how they interacted. In this way, Hams argues “the film does not offer an allegory of the present…there is no right path, no progressive solution – people remain imperfect and motivated by primitive instincts, passions and fears.”

However, others have taken Lazarová as an allegory for the Soviet Union’s authoritarian regime. In an interview, Vláčil notes that “socialist thinking has in fact stopped developing and turned into a religion,” to make the obvious parallel. But more than an allegory, Vláčil works through the relationship between government and anarchy, along with its relation to sexual desire. Both Lazar and Kozlík seem uninterested in stopping their people from stealing and pillaging, though one clan is considered more “proper” than the other; social revolt comes from the young, who forgo various backgrounds for their romantic and sexual passions. Their rejection is not of a particular dogma, but dogma itself, for Marketa refuses to submit her sins to the convent at the end in favor of her love for Mikoláš. What is with all the animals?

Marketa Lazarová often blends its animals and humans together, seeing one as no better than the other. The film opens with a pack of wolves hunting down a man and, while we view this as a savage act, it turns out to be far less horrific than the way humans treat each other later on. Perhaps the film’s most memorable animal is Bernard’s sheep, who is stolen early in The Lamb of God and meets quite the memorable, gruesome fate. Some of the metaphors involving animals might feel obvious (it’s not a stretch to call the sheep’s death a loss of innocence), but what makes it striking is how deftly Vláčil integrates their presence into the rest of his narrative.

Descriptions provided thus far could make the film sound relatively easy to follow, but, right from its opening sequence, the difficulties of processing Lazarová‘s narrative become quite apparent. Few sequences follow classical narrative logic, instead often diving into radical flashbacks or extreme subjective viewings. One of the most bizarre instances follows Christian as he wanders through various wastelands after Roháček has been ransacked by the king’s army. Not only does it include wild POV shots, but flashbacks to events involving the battle that just occurred, as well as another confrontation with Alexandra that may simply be an expression his own anxiety. Another sequence revolves entirely around characters interacting with someone who never appears in front of the camera.

Additionally, Vláčil’s camera movements constantly disorient visual perception. He forces the viewer to watch background action more than what rests in the foreground, and often leaves a scene’s important characters completely out of the view of the camera. The film employs a recurring motif of title cards meant to prelude the action we’re about to witness, but, as their helpfulness is not particularly notable, these almost feel like some ironic joke. (All of this is not to mention one sequence in which God directly communicates with a character, and which goes completely unexplained.)

Why should I check out the film?

Marketa Lazarová is a difficult work, no doubt, and one that will certainly frustrate viewers who aren’t prepared — but there is also almost nothing like it. While one may be inclined to cite it alongside Tarkovsky’s own medieval epic, Andrei Rublev, this film’s cynical take on faith, decentered narrative, and radical aesthetics render it nearly unrecognizable. After I saw the film myself and explained to a diehard fan my own frustrations in following the narrative, he told me that this was, essentially, “the point,” for Marketa Lazarová is not a film you follow so much as you get lost in. Vláčil says he wanted to depict the times so “the viewer can really fall back centuries into the past.” No other description is as apt for this mammoth of a film.

Marketa Lazarová is now available from The Criterion Collection, and can be streamed on Hulu Plus.