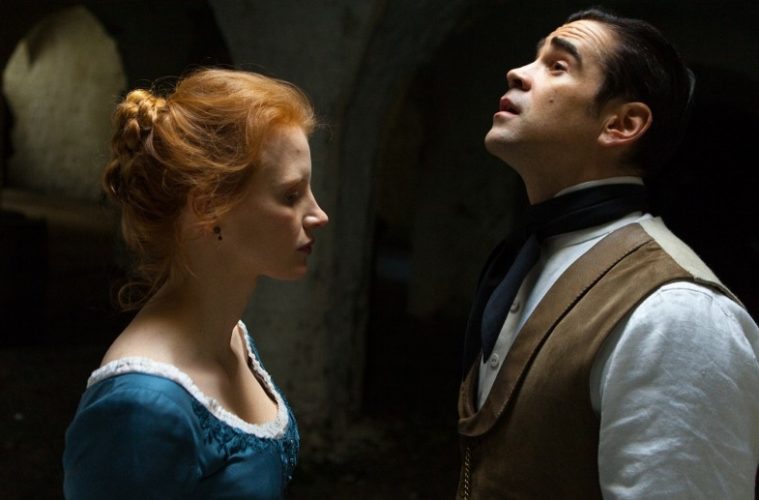 It’s no great surprise that a screen legend’s latest behind-the-camera effort would result in one of 2014’s finest actor showcases. Miss Julie, as directed by Liv Ullmann, takes place almost entirely in one home — and about 80% of its time in that home is centered in a single room — and often consists of no more than Jessica Chastain and Colin Farrell attempting to one-up each other in tantalizing games of cat and mouse. Someone who boasts a decades-long familiarity with dialogue-heavy movies can orchestrate strong performances? Again: no surprise. But while you might think this, alone, would make for a worthwhile time, her adaptation is also a triumph of staging and cutting, where Ullmann translates August Strindberg‘s classic play with a visual intelligence that makes the leads’ sparring as electrifying as anything that hit multiplexes this year.

There are many places — too many, really — one could start when speaking with her, but our time was limited and my interest in almost every aspect of this film is deep. So, without further ado:

The Film Stage: The first impressions left by this film are Julie’s home, which is both “atmospheric,” going by the traditional definition of that word, and feels very lived-in. Explain a bit of the process for finding it.

Liv Ullmann: Well, the location scouting was very important, specifically because we were going to do most of the movie in a studio. Just before we were going to do it, they said they couldn’t afford the studio. But we had been so lucky to find that castle where our fantastic set designer did the kitchen; she became a construction manager as well. She made this kitchen, which looked like it was 200 years old, to be made into a “modern” kitchen of the 1890s. We found two rooms which were their bedrooms, and that incredible tunnel that they look out on and where she leaves in the end — all of that we were given, because we didn’t have a studio.

We were given one more thing: I had, in the script, them looking out of the window, the sun, and the midnight sun — that light — but we couldn’t do that anymore, because outside the windows were white walls. Everything was under the ground, because the rich people could not stand to watch the servants walk on their ground. So we got all that as gifts, because we couldn’t use the studio. I hurried to rewrite the script, and used that we were under the ground for the servants and above the ground for the people. We maybe got more of a luxury of the stairs on the other side of the house, on the upper level, and her bedroom, because all of that is a gift from the house and our set designer.

Can you share your personal reaction upon stepping into the home?

Well, if I can say that. Because I’m an actor, I’m not supposed to say personal info, because then they think I’m “actress-y.” But I am not. That house spoke to me, and I was happy when we didn’t get the studio, because when I found those enormous stairs where she was walking up and down to the bedroom — when I saw the enormous stairs for the little girl, all alone, no mother; I don’t know where the father was — coming into these big, wonderful rooms where there has been a party, but there’s no one there. No sound. No one to belong to. No one to be part of.

And then run out of the windows into the big nature. The nature was there. “Welcome. Here you are; here you belong. This is your book. Sit down. This is your life. This is where you’ll be happy.” All of that, obviously, gave me the inspiration to do Miss Julie in a way that, of course, could have been in the play if August Strindberg was writing for a movie. So all of that was given from the house and from the surroundings of that house. What probably excited me most here was your visual strategy for staging the action — a mix of close-ups with wide backgrounds and two shots dominated by movement and physical action. How much of this was in mind at the screenplay level, and how much came from interacting with the actors, knowing how you’d photograph their faces and bodies?

Well, so much of that was part of it while I wrote it. It’s really my way of writing and making movies. I think the way a face… I was thinking of big areas, these people walking in a big area, where they’re connected to the walls and the stairs. Then, because I’m a film actress, I know the close-up and the possibilities of showing what you can do with a face. That was for me, the center. When we did the rehearsals, and the blocking, that, for me, was decided. But, very simply, the big shot is the close-up, because that’s how I see life, and how I like to direct movies. I don’t know tricks; I don’t know how to do tricks. I love to see it myself, in movies, when directors know how to do that, and do it well, but I don’t know. I just want to show the environment and those faces and what is coming through in those faces, and what happened to them.

Then I’m curious about the relationship with your cinematographer, Mikhail Krichman, specifically what input they have vs. what you’re hoping to communicate.

This is shot on film, and I had in my contract it would be film and not digital. They tried to talk me out of this, but I was in luck: the cinematographer agreed with me. In the end, they had to give up. The contest was done. The cinematographer was there when we found the house, and we walked around it — we walked through the scenes. He had a script even before we knew we would do everything in the house, and when we knew we were doing everything in the house, we talked. He is a master of light, a real master of light.

I believe a director sets the frame — how big, where do you go, and where do you end up. That is the director’s job, and sometimes we would quarrel about that, and sometimes… we wouldn’t. But I win, because I’m the director. [Laughs] He’d win with a knife, because that is his wonderful way, with his movements and his things like that. We had a good connection, but we did discuss, because I think that within every director there is a visionary kind of cinematographer, although I wouldn’t know how to do it. And I think within every cinematographer there is a director.

Two moments stood out: there’s a very expressive bit of candlelight on Samantha Morton’s face at one point, and, toward the end, Chastain is exposed to this very harsh light as Julie’s nearing her end. Where do you meet on there?

Oh, that’s where… I and the cinematographer, we never knew each other before, but each of us had the same favorite painter, Vilhelm Hammershøi. He’s a Danish painter. When you talk about the maid, Samantha, standing by the window, doing all these things — standing by the window, going through the doors — that is Hammershøi. We knew the same paintings, and we agreed that we loved each other for that. The harsh lighting: well, he’s the master of light. I’m sure a lot of actors would not like to have that, but if you talk about the first time she comes into the room, and it’s the first time she sees a face, you see a woman who comes in, who is tormented, who is coming in with some kind of feeling of non-existence — non-love, non-attention.

Almost like a ghost in the one place, in the castle which is hers, but where she doesn’t belong anymore, where she has no place. That harsh light, you have to give to the cinematographer. How to describe it for him, I don’t really know, but I know he’s the master of that light. I’m not sure that Jessica, the first time she saw it, really loved it, but I love it. I think, certainly, within it comes this woman, and she already is bringing in that light — who she is.

The film’s sense of pacing is very fluid, at least in how it complements the narrative. You’d shot this in only 28 days. What challenges came with shooting this in such a span of time?

It was terrible. I was even ahead of schedule, and then they came and said on a Thursday, “We are not going into next week. It ends this week.” It was unbelievable because, according to my schedule, we had four more days. I’ll tell you what it was: it was preparation — a lot of preparation. It was a lot stubbornness. “I’m not giving up.” We did so much of Samantha’s things the last day, when we didn’t have the other actors and it was her incredible stubbornness, not ruining this thing for me. And, of course, it was the cinematographer. He didn’t give up on doing the light, keeping the light. “We’re not hurrying. It’s going to be the best.” We did not give up. I’m proud of that, and we can only thank the artists of this movie, which is the actors, the designers, the cinematographer, and an incredible crew. An incredible crew. They didn’t give up. They deserve the credit, because we did it in too short a time.