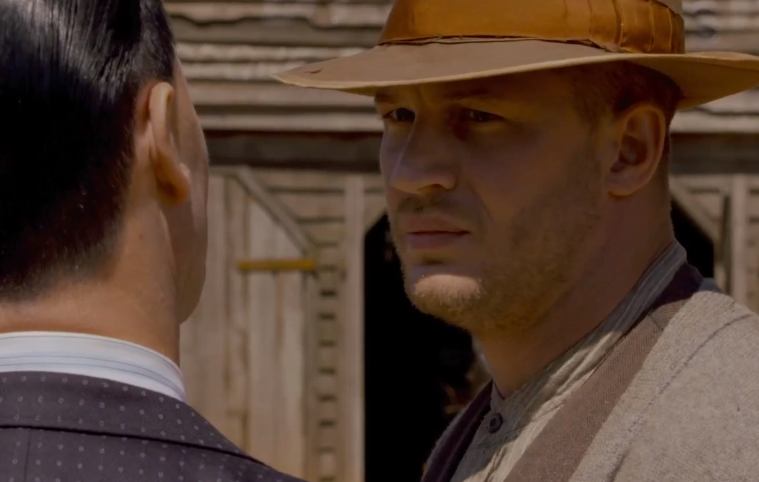 Despite our less-than-glowing (but, nevertheless, good) review from Cannes, I’ve got some reasonable hopes for John Hillcoat‘s Lawless. Judging by the first trailer, his movie appears to have a period design down pat, the cast is one of the best we’ve seen in 2012 thus far, and the subject matter is one I gravitate to rather strongly.

A second, short preview has now landed and, even having heard that Lawless is, perhaps, more of a minor work than we’d like, this writer’s still on board. Everyone — yes, including Shia LaBeouf — look right on top of their game, while the side of me that can’t resist Prohibition action is continually pleased with the quick snippets being trotted out in these previews. If the movie’s just 115 minutes or so of what’s being sold, I think I’ll be happy.

MTV has also received a fun little item pertaining to Hillcoat‘s film, this one being an infographic on the guns used by Tom Hardy, Jason Clarke, and Guy Pearce. Another of this sort will debut in each of the six weeks leading up to the film’s opening, and you can see the first below:

Synopsis: LAWLESS is the true story of the infamous Bondurant Brothers: bootlegging siblings who made a run for the American Dream in Prohibition-era Virginia. In this epic gangster tale, inspired by true-life tales of author Matt Bondurant’s family in his novel “The Wettest County in the World”, the loyalty of three brothers is put to the test against the backdrop of the nation’s most notorious crime wave.

Have you been keeping tabs on Lawless, and does this new preview make you think this was a good idea?