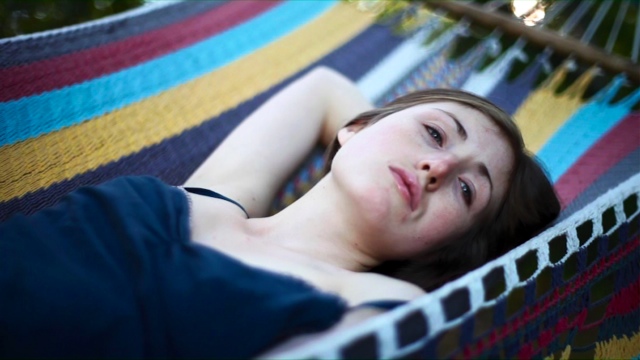 I recently praised Actress, an upcoming documentary that follows former Wire actress Brandy Burre and her attempts to relaunch a long-stagnant screen career. Although the film doesn’t begin its theatrical release for a few more weeks (there’s more on that a few paragraphs down, actually), director Robert Greene has just announced his next feature — judging by its description, both the man’s most-ambitious yet and one of the more fascinating “fictiononfiction” films of recent years.

Let’s make some sense of that particular classification: Kate Lyn Sheil, recently seen in Listen Up Philip (on which Greene served as editor) and House of Cards — as well as something of a current indie darling — will headline Kate Plays Christine, a boundary-blurring depiction of fame, mental illness, and people driven to their own end. Still not there? One will undoubtedly have a better grasp on things after reading a description posted to CPH:DOX. I’ve provided the first and last paragraph as a means of giving some sufficient picture, all while encouraging you to read the rest.

“In July 1974, 30-year-old television host Christine Chubbuck went on air in Sarasota, Florida for her morning talk show Suncoast Digest and said, ‘In keeping with Channel 40’s policy of bringing you the latest in ‘blood and guts’, and in living color, you are going to see another first – attempted suicide.’ She then shot herself in the head on live TV and died fourteen hours later.

Kate Plays Christine will use the melodrama-as-documentary style of my previous film, Actress, to investigate the psychological truths revealed by Christine Chubbuck’s story by observing Sheil – a woman tasked with portraying the doomed television host. The film will follow Sheil as she prepares for the role, researching Chubbuck and transforming herself before our eyes, working toward a filmed reenactment of the final days of her life, including her fateful last hours. The film will also serve as a portrait of central Florida, an American dreamland of garish colors, bright lipstick, humid passions and gun tragedies.”

In the meantime, Greene‘s Actress needs help. A crowd-sourcing campaign on Seed and Spark is asking for a bit of money to bring that film to theaters, despite said film having being picked for distribution by Cinema Guild. As it so happens, music rights are holding things up, and there’s a need to (as of this writing) clear $8,410 before you, yourself, can actually see it. What else can be said on my part, save for “this film is quite good and you’ll want to have it available”? A concise and, rare as this sounds, amusing campaign video clearly lays out the perimeters of this situation, and I’d very much suggest giving it a look. Trust me: you’ll be glad to have lent a few dollars once Actress is before your eyes.

Finally, watch a documentary on the life and death of Chubbuck for some idea as to where Kate Plays Christine will head:

Are you intrigued by the set-up of Kate Plays Christine? Are you hoping to soon see Actress?