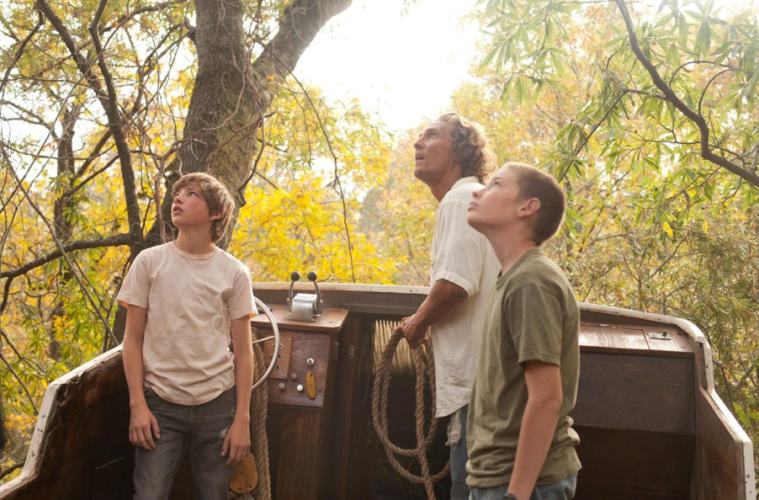 Fans of Take Shelter or Matthew McConaughey — along with those who comprise the cross-section of that very particular Venn diagram — might want to listen up. In a rather nonchalant manner, Roadside Attractions have announced that Jeff Nichols‘ third film, Mud, will open on April 26th, almost a year after its Cannes premiere. Although Lionsgate had bought the film in conjunction with the independent distributor, a Sundance press email points toward the bigger end having fallen off — and, as an unfortunate result, I’d now expect a smaller release than what, once, might have been planned.

The picture stars McConaughey as Mud, a man on the lamb who’s trying to reach his beloved, Juniper (Reese Witherspoon), while also evading a strong arm of the law coasting the Mississippi River. Helping him out are a pair of 14-year-old boys, Ellis (The Tree of Life‘s Tye Sheridan) and Neckbone (Jacob Lofland); also figuring into it, somehow, are Michael Shannon and Sam Shepard. I’m not fully sure as to who they play, but do you really need to know as much in order to appreciate that news? I’d certainly hope not.

Our reaction from Cannes wasn’t too enthusiastic, but Nichols did enough right things in Shotgun Stories and Take Shelter — which is truer of the former, to be honest — and he has such a strong cast, too, that Mud is one I’m willing to hunker down for. And if this is the same festival that didn’t really respond to Cosmopolis… no, I won’t set my expectations that high. It’s just something to keep in mind.

Is Nichols’ film one you’ve been hoping to hear more about? What are your thoughts on this release date?