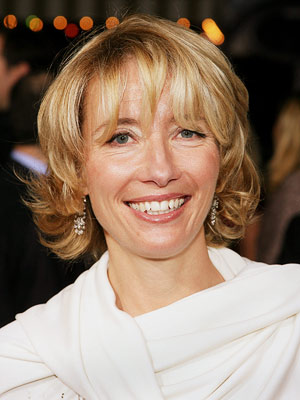 We heard back in January that Will Smith and Jay-Z would be teaming up to produce a remake of Annie for the former’s daughter, Willow. This would be the next collaboration between the two, who previously produced the play Fela!, which receive eleven Tony nominations last year. Any kind of news on it since then – with the exception of a rumored director – has been non-existent, but the latest big update has just come from Vulture, who report that they’re asking actress Emma Thompson to write the screenplay.

Smith recently starred alongside her in Men in Black III, and it’s hard to imagine that their time together on set didn’t lead to this proposition. Asking her to work on the screenplay isn’t a bad idea, even without past associations; she recently wrote both installments of the Nanny McPhee series, in addition to the 1995 adaptation of Sense and Sensibility, which earned her an Academy Award.

This would probably be the first big movement on the project since it was announced, and arguably the biggest one so far. Negotiations are reportedly underway right now, and her joining seems entirely possible. Not only is this a big project, but she already has a working relationship with one of the producers; the latter part of that makes it all seem more likely. There’s also a benefit to the movie itself, as having an Oscar-winning writer working on your film is always a boost of credibility, something that this might need. I mean, really, isn’t he idea of Will Smith producing a remake of Annie for his daughter a little silly? Other than the fact that it would probably pull in a decent amount at the box office, that is. But if you have her onboard? Then things don’t seem that crazy.

Is Emma Thompson’s involvement enough to make you want to see this new version of Annie?