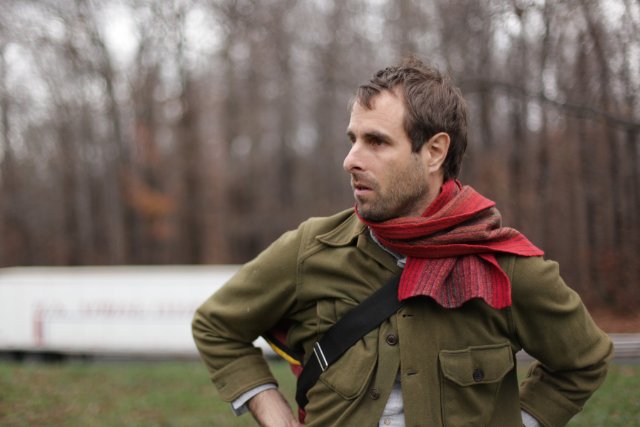 Before his third film premiered at Sundance, Rick Alverson was unknown to yours truly. Having since seen The Comedy, though, I’m of the opinion that we’re now dealing with a major talent, someone who has a lot of brutal and funny things to say about the state of his own people.

This, alone, speaks volumes about Alverson’s gumption: He put Tim Heidecker and Eric Wareheim together and gave his film that particular title. It’s practically asking for attention, and just what he does with the already-there crowds’ expectations is incredible. But that’s not all. The Comedy is as funny as any film I’ve seen this year, with the director using his actors’ great strengths to let the scenes play out in a comfortable fashion — then, employing the very same technique to shock and upset us, sometimes for laughing in the first place.

Here’s Alverson with his thoughts on making the film:

I’d like to start off with a pretty basic question: How did you get involved with Tim?

We had a mutual friend that introduced us; I was familiar with his work and I was interested in recontextualizing it into a different environment. I approached both him and Eric about getting involved — and Gregg Turkington — and it just kind of took off from there. It was pretty straightforward.

What did you do to recontextualize it, then? For instance, did you consult with them as the screenplay was written?

No, the script was written. It was a 20-page script without any scripted dialogue; that’s the way I work with all my movies. So, casting is very important, you know, because you have to utilize the native voices of the subjects. I just thought they have a very keen interest in discomfort in the comedic world — and I have an interest in discomfort in dramatic projects — and I was sort of fixated with a kind of coded way of speaking that I noticed was prevalent in some of their work & some of their interactions.

I had been exposed to, in my own life, speaking in a certain kind of language that had some sort of remove to it — whether it’s irony, or whether it’s obscenity. I was interested in creative engagement with language and communication, finding ownership in the way that we talk to one another. So I wanted to get Tim and Eric involved, and Gregg Turkington, and Jeff Jensen — these folks who knew each other and had a chemistry where they could have these certain exchanges. Was there ever any trepidation on their own part, or were they always willing to go along?

Oh, no, I think there was definitely trepidation, but they ultimately have a lot of trust. The way that I work, that’s probably one of the most important things with the actors that I work with, because I do ask them to bring a lot of themselves to the thing, a lot of their attributes. Then we sort of fictionalize those in different contexts and manipulate them to some degree. Because, you know, I’m interested in a certain amount of naturalism in the performances, and it’s a very successful way to achieve that.

But Gregg Turkington, for instance, told me outright — with a really kind and impassioned email — that he wouldn’t have anything to do with this movie, and that he couldn’t. Because although he felt that it might be a great film, he said that he was so repulsed by the individual that he was supposed to be portraying that he just couldn’t have anything to do with it. And I just relentlessly pursued him because that’s exactly the conflict that I wanted to be present. [Laughs]

I love the supporting cast you have here, too, particularly the semi-love interest played by Kate Lyn Sheil. In finding them, where did you look? Was it films they were in, or even just casting agencies?

I’m not really big on casting agencies; I mean, they’re sort of a necessary evil, I guess. [Laughs] Maybe I’ll change my mind after a few more films. But, basically, Kate and Alexia Rasmussen, I met with them, and I had worked with a lot of non-actors in the past, or worked with musicians, or people who had done some acting — but, primarily, were performers in other forms. I sort of had grown accustomed to being able to speak to people in a particular, kind of pedestrian way outside of the analytics of the craft, and approach it in a little more common way.

So I was looking for people who had some real skepticism about the craft and the way that it’s used. That had questions, that would be eager to engage in the particular methodology that we used to make these movies.

After looking over your first two films, The Builder and New Jerusalem, this seems to be the biggest cast you’ve worked with. Even if Kate and Alexia aren’t that well-known, they’ve done work which, perhaps, is a bit easier to find. Did your approach change with them, then, as opposed to with those who have never acted before?

Yeah, you know, I was thinking about this the other day. To some degree, the way that I work is, there are no rehearsals, per se; when the exchanges occur between the actors, we film that the first time. There are just a lot of conversations about the way that we work, about general questions and concerns and an exploration of movies, the craft. Again, I’m looking for a certain amount of skepticism.

Working with people who are trained actors — like Kate and Alexia — there’s a certain amount of remove that I take from the thing, you know? It is different. I probably let them flail a little more than I would other people, just so that they’re off-balance in a good way. But I was really happy with their performances; they’re both amazing. I’d love to work with them again. I still think about the scene where Kate’s character has (what appears to be) a seizure. That made me very, very uncomfortable, so it’s clear something worked between you two.

Yeah, I had her watch some videos. There’s a strange amount of videos on YouTube of people videotaping their seizures; there are quite a lot of them. Initially, you get a real sense of the importance of these people sort of showing what they go through — from a medical perspective, sort of — you know, people experiencing things from their home and sharing it with others so they can be prepared.

But then there’s so many that it almost becomes like a really, really strange engagement with that very private thing. And we were looking for ways that we hadn’t seen seizures in movies, or conceptions that you might see. Sort of like an aberration of the thing. How a person would experience it, it would be idiosyncratic — they wouldn’t always have the same symptoms. There would be bizarre aspects to the behavior — and so we were trying to nail some of that — and I think she did a great job.

I read an interview where you said that, as filming goes on, there’s often the question of, “Where is it cruel and where is it engaging?” When you’re editing, do you find portions that were, perhaps, more cruel than engaging?

Yeah, the edit was difficult. We were under a deadline for trying to get into Sundance with the cut. Also, just, it was really delicate, because the thing could be pushed into two different camps, which is: the increasingly difficult exploration of this kind of cruelty, and this sort of open, more welcoming kind of thing that’s couched in humor, and is more accessible.

There’s a frightening amount of power in that moment, where you can let a person in or keep them out of the experience. I think that, traditionally, mass-consumption entertainment — Hollywood or whatnot — has a very interesting way with how to manipulate the thing so that it is engaging at every moment. They’re not looking for more of a dance of the repugnance.

It’s difficult, and there’s also a certain amount of responsibility when dealing with, you know, recreational cruelty. I wanted people to feel compromised; I didn’t want them to be vindicated just by, essentially, being able to remove themselves entirely and objectify the characters. I think that working with some of the accessibility and some of the humor was a way to keep them implicated in the thing to some degree. Of course, that’s not going to work for everybody in a larger demographic, but I think that it did work. Reactions, I think, have been pretty decisive — coming out of festivals, most people seemed to love it or hate it. Despite certainly being someone who loved it, I’ve read those who were not fans at all and, to some degree, I can kind of see where they were coming from. As the man behind it, what have you made of the general reaction? Is it what you expected?

I’m pleased with it. Again, I don’t think I ever… my other work had a relatively small audience, and probably an audience that I’m more familiar with. When you reach out to these larger demographics — even when you put cable VOD in 12 million homes or, you know, 1,200 people at the Eccles at Sundance — you’re flirting with something that, traditionally, has been a lowest-common denominator, sort of deluded, accessible… form has been given to the larger dynamic variety of individuals and demographics.

That’s a dangerous place, you know? Because, in order to make it pleasing to everybody, you have to reduce the thing to a very deluded, impotent state. I am happy, but you do become keenly aware of the limitations of appealing or pleasing anyone; you realize why our country’s so divided, politically, with even the little, benign experiment of releasing a movie.

Dealing further with reactions, did you ever think of the Tim & Eric fanbase?

I think only insofar as I was dealing with Tim & Eric as filmmakers, artists, and performers. I understood more their relationship to their material, less so than I was thinking about their fanbase; I understood that those individuals, likely, would be interested in what they’re doing. You know, I think both with myself and with Tim & Eric, we wanted to differentiate it from their other work and make that clear — but, to some degree, also, we were all excited about being a little confusing.

Their involvement in a dramatic movie and a movie called The Comedy, there being comics in it — the most accessible, expedient way to destabilize the thing from the start is what I wanted. And, also, appeared to be what they were interested in.

The Comedy is now on VOD and hits limited theaters on Friday, November 9th.