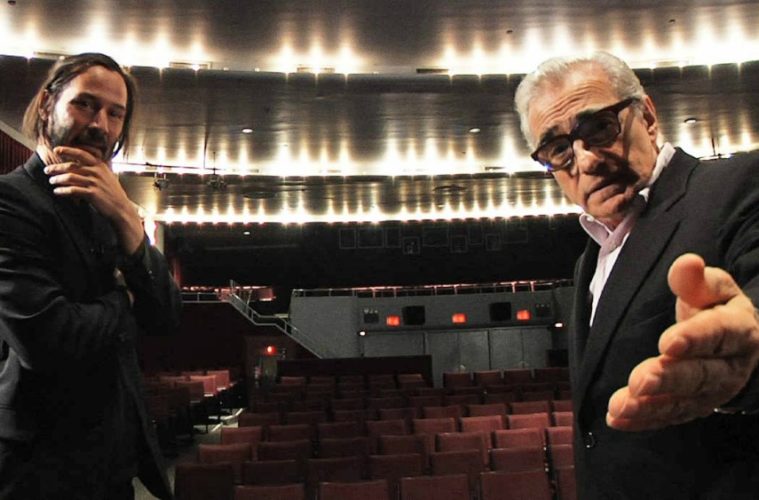 As a director, Christopher Kenneally only has one other feature-length documentary to his name. It’s likely you’ve never even heard his name up until now, but the up-and-coming filmmaker has already worked with Martin Scorsese, David Lynch, Steven Soderbergh, Christopher Nolan, David Fincher, James Cameron, George Lucas, Lars von Trier and the Wachowskis — among a few other Oscar winners.

It’s all thanks to Side By Side, an engaging new documentary focused on the battle between film and digital in today’s modern cinematic landscape. Kenneally was able to nab all these names through the help of Keanu Reeves, the film’s producer, interviewer and “host,” who guides us through this complicated subject with pit stops by some of the medium’s most successful artists. How did your partnership with Keanu Reeves form?

Christopher Kenneally: Keanu Reeves and I were working on a movie called Henry’s Crime. He was the producer — he was also acting in it — and I was the post-production supervisor. You know, we were spending a lot of time doing the sound mix and digital color correction — all the aspects of post he was really involved in and curious about. So a lot of the conversations we have in the movie — and a lot of the questions we ask people — are kind of things he and I had been talking about for a few months.

And he had seen a documentary I had made a few years earlier called Crazy Legs Conti: Zen and the Art of Competitive Eating, and he liked it. He said, ‘Hey, you’re a filmmaker. Why don’t we make a documentary about this topic?’ So, yeah: The movie definitely wouldn’t have been made at all without Keanu; it was his idea, originally, and he funded it and all that. It definitely morphed from the original idea quite a bit, but that’s how we came up with it to begin with.

I read that you and Keanu conducted a lot of research in film history and film technology. At what point did you feel there was enough to move forward?

Yeah, I mean, it’s such a giant topic. You know, you could’ve researched it forever, but since I had already worked in post-production for about thirteen years, a lot of the things I was somewhat familiar with… and, also, a lot of the interviews themselves — the early interviews — were researched as well as material for the movie. We went to a place called Cameraimage in Poland, which is a film festival that is attended by cinematographers from the world over, and we got a bunch of interviews right off the bat. Just being able to talk to these world-class cinematographers definitely filled in a lot of gaps and gave us a lot of other leads to pursue.

When it came to the directors who are prominently featured here — and, also, the ones you’ll show off in advertising as a way of capturing someone’s attention — was a lot of that on Keanu’s shoulders? Did the cinematographers also have a spot?

Yeah, it was a combination. Just having Keanu in the film, I’m sure, opened up a lot of people, and made it known that it was a real project; if I was calling by myself, I’m not sure I could’ve arranged all these folks. But, also, it snowballed. As we people to our list, and we would send that out with our emails — like “these are the people we’ve spoken to” — it made people more interested. And, also, this is a topic a lot of people wanted to talk about. They were, like, “Yes, I’ve been waiting to unload my opinion on this subject.” So that was cool.

When we really got stuck, we’d have Keanu step in or give a call to one of these people — some of the people he knew already, some people he didn’t, but he’s definitely well-respected. People wanted to talk to him.

During the selection process, did you ever think “you’ll never get him, he won’t be available, they’re not around,” or was that never a concern?

Well, you know, I like to think positive — everyone thinks I’m crazy, because I’m always like, “Yes! We can get this person!” — and sometimes we’d fail, we’d have some heartaches, but we got some amazing people, so… I kind of just don’t operate that way. Maybe I’m slightly crazy, but I always think we can do anything we try. In this case, it kind of worked out. I assume you, too, were also in the room with them. Right?

Yeah, absolutely. We’d have questions that we’d prepare, that Keanu and I would go through; and we were kind of editing, sometimes, as we were still going up to interview people. There were certain people we needed certain information from and, obviously, we researched what their role in this whole history of the development of digital cinema was, so we knew the proper questions to ask people.

But then Keanu would make it very conversational at points, too, which I think was great. He was able to kind of go “off script,” which I think put people really at ease and allowed us to get — as you can see in the movie — some really kind of relaxed, candid, honest, interesting interviews from people.

Did you, yourself, ask a lot of questions?

Yeah. Keanu was very busy, too, so there were a couple of interviews in the movie that I conducted — and, also, at the end of the interviews, Keanu would always turn around and say, “Director, you got any other questions?” Then we would, you know, usually fire a couple of more questions off people.

So, was there an intimidation factor when you go in and see David Lynch or Martin Scorsese? Did it take very long to get into a groove? Some of these people know him, so maybe you were already off on a good foot — but did it take them a while to get their thoughts out in a cogent fashion?

Sometimes, but not really. Like I said, everyone kind of already had an opinion where they’ve been dealing with this stuff for years, so whether they’ve talked about it before or not, they’ve had to kind of formulate some opinions in their mind, anyway. So people were pretty much ready to go when we sat down with them, and I don’t know if you’ve met Keanu, but, he’s just a really genuine, nice, smart guy, and he’s easy to talk to; he puts people at ease, so his skill as an interviewer, I think, took the film to a different level than probably if anyone else had done it.

As you’re editing what must have been hours and hours of good interview footage, how did you decide what to retain, and how was it interlaced with the more “educational” portions? Was that a lengthy process?

[Laughs] Yeah, traveling around and getting to meet great directors, that’s fun. Sitting in an edit room, trying to figure out how to make a story out of all this material was difficult. We interviewed about 140 people; I think 70 people actually made it into the doc. Also, some of the interviews were an hour at least (or longer), so there was a lot of material to go through. It’s a difficult process, but it’s a fun and enlightening process as well.

And to answer the other part of your question: The structure I had an idea for, originally, was to really follow the workflow of making a movie, or follow the image all the way along its chain — all the way from capture, through edit, through visual effects, through color correct, to print-making, to exhibition. So I knew that the movie would sort of hang on that “spine,” and, at the same time, there was kind of another spine that was going through, which was the history of the digital cinema. From the very idea that there could be a CCD circuit — or, a “chip” — all the way through, you know, where we are today and where we may be heading.

It was kind of those two structures working at the same time, and as a storyteller, that was an interesting problem to solve: How do you lay that out and tell it? How do you take a topic which could be really complex, and it could be really dry & boring, and make it both understandable and, hopefully, interesting and entertaining for people.

Did you have to acquit yourself with some directors’ work before you started? Maybe you didn’t know them as well as others, or…

Absolutely. That was something that was so inspiring, too — there’s so many great, beautiful-looking movies out there, throughout history, whether they were shot on film or digital. To be able to have this be my job, to cull through those and watch them and think about them? It’s just…. I’m a pretty lucky guy. It was fun.

One of the really interesting little things in the movie was this Anthony Dod Mantle “thread” that runs through there. You’d see the first digital movie that was shot was A Celebration, the Dogme 95 movie. I looked it up, “Okay, shot by Anthony Dod Mantle. That’s interesting.” Then, one of the other big milestones was 28 Days Later, which was shot with the Canon camera that was a consumer camera; it was 24p, so you could go back and make a film print out of it — which you needed to do at the time — and, again, Anthony Dod Mantle’s name pops up. Then, the first mostly digitally-shot movie that wins the Best Cinematography: Slumdog Millionaire, again Anthony Dod Mantle. So we were, like, “Wow, we definitely have to talk to this guy.”

A friend of mine we ran into had worked with him, and he just texted Anthony, right there — “Hey, you want to meet these guys?” — and, over six months, Anthony and I exchanged emails; he was in South Africa, shooting Dredd in 3D. And, finally, after six months, he said “Hey, I’m going to be in London on this day and this time,” and we hooked up and got a great interview.

I figure I’d end this by asking if there is a correct answer to the debate of film vs. digital, or do you feel, as some argue, that it’s a matter of what the artist wants?

Yeah, there’s no correct answer; it is a matter of what the artist wants. The difficult thing, though, is that it’s not going to be a choice eventually, I don’t think. I think film will go away, or it will become a very small, kind of rare thing when someone uses film. For certain people at certain levels, they can make that choice — certain directors and certain cinematographers.

But I think, for people coming up, they’re going to be forced more and more to shoot digitally. And not only forced, but I think a lot of people are going to choose to shoot digitally. Kodak is struggling, camera companies are no longer making cameras that shoot film, so it’s inevitable; it’s just kind of a question of how long they’re actually going to be side-by-side, or how long there’s actually going to be a choice. That’s kind of sad, but that’s also life in a way, you know? And it’s amazing that film was around as the premiere technology for over 100 years. Nothing lasts that long nowadays; things become obsolete pretty quickly.

Side by Side is now on VOD and in limited release.