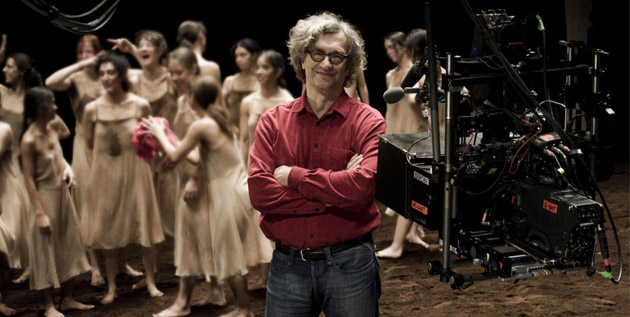 The day after the Oscar nominations were announced I had the opportunity to chat with director Wim Wenders on his freshly-nominated documentary, Pina, which is now in limited release. The 3D doc focuses on the life and influence of Pina Bausch, who tragically passed away right before shooting finally began. Within the film you can feel the sorrow of the dancers and how connected they felt with Bausch.

She was more than just an instructor of dance for them. She was a guide to life itself. Bausch’s stunning choreography is filmed up close and personal with 3D cameras to give us a true sense of what is going on during a performance and it becomes an emotional ride. While chatting with Wenders I was able to probe him on the Oscar nomination, audiences potentially not seeing the film in 3D, what drew him back to the film after Bausch’s death, and much more.

The Film Stage: First off, I want to congratulate you on the Oscar nomination yesterday morning.

Wim Wenders: Well, actually in Berlin it was early in the afternoon. Oh, interesting. So you were already up and about. How closely did you follow that? How closely were you involved in the Oscar push or did you sit back and let it happen?

No, I was in New York for a while and in Los Angeles. I did a number of interviews. I did lots of Q&As with audiences on both coasts. And yesterday we were following the live feed from Los Angeles. All of us in our office. Of course, they didn’t include the documentaries, so when we were not nominated in Best Foreign [Picture] where we had a chance and we were already among the last nine nominations, when we were not in there we frantically tried to find out how we could get to the page where the other nominations were, and for a few minutes there was pandemonium until we finally realized we were nominated in documentary.

You would think that they would have a contact number and maybe even call you. Or reach out to you directly, but I guess…

No. They would have a lot of people to call in that case. This is true. [Laughs]

I think it’s cool for the entire planet to put it out on the website. And that’s fine. It was fine with us. As we were following the live feed, and then we realized documentary wasn’t going to be on it, we had to reorganize ourselves.

What cameras did you use to shoot Pina?

We started to shoot in 2009. The range of cameras in 2009 was quite limited. We needed digital cameras that were able to sync to the pixels. There wasn’t a lot of them around that offered that at the time. So we shot on Sony 1500s.

How long did you shoot for?

Obviously Pina [Bausch] met a tragic end right before you even started shooting. You had been developing this project for a very long time before that. Was the dance troupes response immediate or did you leave to get away for a while and slowly come back?

Well, my own response was immediate. I pulled the plug and let everybody know that the film was over for me because it seemed unthinkable to continue without Pina. We’d dreamed of this for so long together. So I walked away with it. The dancers performed even the very night that Pina had died. They went on stage in tears but they knew that that was what Pina would have expected them to do. And several days later, as a company, they decided to continue. So while I gave up immediately because I just couldn’t imagine that the film could be made, the dancers continued. And because they continued, they started to rehearse a couple of months later exactly the four pieces that Pina had put on the schedule for us to shoot them. That’s when I realized maybe it was wrong for me to walk away from the film. And even if you couldn’t make the film with Pina anymore, maybe there was another film that the dancers and I could put together for Pina.

And that’s when we got together again and started to think. It was the dancers who were really true to their heart and made me believe that I shouldn’t walk away and that they would really love to do something in homage to Pina. They really felt they needed an outlet in order to deal with their sorrow and their pain and I realized that nobody had been able to say goodbye or thank Pina so I felt the film would be a chance to do that. But we had to completely rethink it. We had to make a totally different film. There’s film magic at times. The dance, Kontakthof... I believe is how you pronounce it?

It has you playing with three generations of dancers, which you have mentioned in other interviews is kind of unheard of; it was groundbreaking at the time. And you switch between the [dancers]. How much did you want to remain true to a performance you might actually see on stage versus what was possible with film?

Well, that was the only time where we took such liberties to cut away from a performance. Because we could cut to the identical scene, the identical choreography, obviously of somebody else’s performance, but as that was such a unique thing that Pina did… to rehearse and do the same choreography with three generations. And that was the very reason why we had chosen Kontakthof as the last of our four pieces. And at the time Pina and I had discussed this idea that I could sort of cut through the generations, Pina had been a little curious how you would do that.

She didn’t really see how one could do that. I sort of explained it to her that we would shoot the same angles and then the choreography would go on but it would switch between the generations and she was actually very curious how that would work. She obviously couldn’t see that anymore, but I think we did it as much as possible exactly the way I had explained it to her. The way Pina had been looking forward to discovering.

Clearly the film is dedicated to Pina. It even holds her namesake. Did you already have a name for what you were going to make had she survived her fight with cancer?

The film would have been called Pina’s Eyes. Because the film that we wanted to do together would have concentrated on Pina’s look. And I wanted to see Pina’s eyes at work or her look at work. I would have shot a lot of rehearsals. I would have shot a lot of the correction sessions that Pina did in the morning after every public performance. She worked for hours with the dancers on everything she had seen the night before that she thought needed work. We would have traveled with Pina to South America as well as Southeast Asia. I would have concentrated on how does Pina see and what does she see? Pina’s eyes would have been the center of that film and Pina’s Eyes was my working title for that film. For my final question, obviously 3D is such a huge component of this film. You’ve mentioned that it was kind of the key that opened up the lock for this film to be made. How much concern do you have about audiences around the world perhaps not seeing the vision you intend? Or is it just part of the [drawback] of the new technology that has arrived?

Well, I very much hope that most of the audiences that would see Pina, would see it in 3D. And so far, as it has been distributed in many countries, I would say between 80 and 90 percent of the audience does see it in 3D and I think it gives them a new look at this technology that of course a lot have discovered in a different genre. More action-based, blockbuster movies. So a lot of people have an idea of what 3D is and one of the things we wanted to do with the film, obviously, was to create a very different aspect of 3D and show that it was capable of so many other things. Really, it was the beginning of a big revolution in cinema that is definitely not only linked to action films or animation films. Pina is now in limited release.