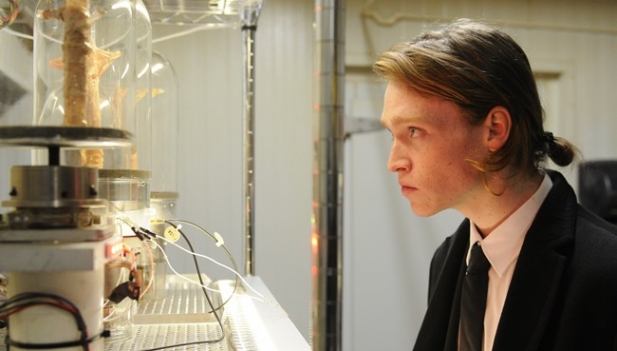 IFC Midnight are living up to their name and goals, with two horrifying acquisitions (of very different stripes) coming down the pipeline these past couple of days. The first of these is Brandon Cronenberg‘s (yeah) Antiviral, a biological body horror film (yeah) that played at Cannes just a few weeks ago; the second is Replicas, a home invasion thriller that premiered at Tribeca in April. [Variety and THR]

Antiviral follows a young technician (Caleb Landry Jones) working at a clinic that sell diseases, once contracted by celebrities, and who “manipulate with photoshop precision these coveted diseases into warped distortions of the human face revealing the essence of the malady.” The purpose, silly as it may seem, is to create a connection that makes living in this dystopian future more bearable. If it sounds like too much, our Cannes review confirms that Cronenberg didn’t hit a home run his first time out — but I am curious to see it one of these days, if only for reasons that are too obvious to explicate. Sarah Gadon, Malcolm McDowell, and Douglas Smith also star in the film, which has yet to receive a release window.

Replicas doesn’t have any STDs, but it foregoes that in lieu of a much more primal horror. The home invasion thriller — which marks Jeremy Power Regimbal‘s feature debut — stars Josh Close (who also wrote the script), Selma Blair, and James D’Arcy; I saw (and liked) it back in April, calling it “engaging, tense, and, for the most part, formally accomplished.” I did, however, caution that plenty wouldn’t appreacite the film’s raw nature and, especially, the unsubtle way through which it’s communicated. If any of this sounds appealing, I’m sorry to report that you’ll have to wait until 2013 for a theatrical and VOD opening. If need be, I can just give a beat-by-beat plot synopsis through an email.

Let’s get a little more sunny, shall we? Variety reports that Studio Ghibli’s next export, From Up on Poppy Hill, will be getting a U.S. release from GKids, the company behind recent Oscar nominees Chico & Rita and A Cat in Paris. It’s a family effort between writer Hayao Miyazaki and his son, director Gorō Miyazaki, one which abandons the idiosyncratic nature of their earlier works to focus on two “a pair of high school students who are battling the demolition of a historic building as they deal with their own families’ past secrets.”

We saw the film at TIFF this past September and, in our review, acclaimed Poppy Hill‘s humanistic story — along with, of course, its beautiful animation. The film won’t see a theatrical release for another nine months, but an Oscar-qualifying run is expected to occur later this year, with a Kathleen Kennedy and Frank Marshall-produced dub likely to play.

Will you look out for any of these three films? Which are you most interested in?