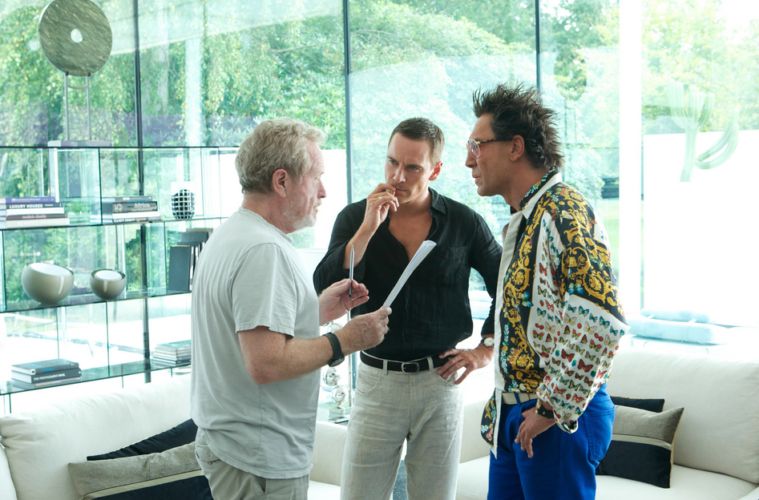 I Can’t Advise You: A Second Look at ‘The Counselor’ With Ridley Scott’s Unrated Director’s Cut Most, hearing that a Ridley Scott film will receive the extended-cut treatment on its home video release, would not bat an eye in any ordinary instance — here are 17 more minutes of Robin Hood! — but, by now, it’s been well-established that The Counselor is far from any ordinary Ridley Scott film. Although it had opened to mild domestic box-office earnings and relatively middling, occasionally venomous reviews, a reputation-of-sorts grew rather quickly — perhaps more quickly than is truly reasonable, but nevertheless to the point that the conclusion of its short theatrical run (which went with most of America taking no notice) already saw a cult finding formation. For the small-but-vocal group who’d taken this strange, oblique-to-the-point-of-intentionally-off-putting film for what it was at least attempting, resistance to more is impossible. As someone who found themselves frustratingly torn between cult and consensus — by that token finding The Counselor half-unique, half-standard, and with some things to show for in that divide — an urge to revisit was high, if in large part because a glance at the more complete translation of Cormac McCarthy’s screenplay might settle issues which surrounded a work I’d so desperately hoped to embrace the first time out. You can imagine my surprise that, in looking at the extended edition’s Blu-ray — now available from 20th Century Fox — significant differences would become evident from the outset. Increasing the bedroom tryst between Michael Fassbender and Penélope Cruz by multiple minutes allows McCarthy’s dialogue to venture off into far, far dirtier territory. The inevitable tragedy being established herein brings with it even some sense of the tragic; it’s also one of many moments littered with genuine (however appreciably vague) comedy, such as the subsequent sequence wherein a Bruno Ganz-portrayed jewelry dealer can, now, go on a minutes-long digression (and it really feels like a digression) about the distribution of diamonds.

This is but one example of cosmetic alterations you may not entirely understand the full purpose of — odd for a screenplay that may as well have demanded characters hang guns labeled “PROPERTY OF CHEKHOV” during one of McCarthy’s 800 portent-laced wordings — yet the initially unsettling experience of hearing his extraterrestrial dialogue (how I perceive no quotation marks, an overriding lack of commas, etc.) spoken out loud seems to have faded, no longer require much in the way of true adjustments. “How was Brad Pitt’s line about cartels and coincidences not so clearly a pleasure the first time around?,” and other such questions would spring up when reflecting back; “mea culpa,” as so many critics will fail to ever say.

And while some of these alterations — a few scenes have been shifted around toward the picture’s beginning, for instance — may fail to register with that same sense (even slight) of a second-look revelation, in nearly every existing instance did lengthening The Counselor’s runtime allow a narrative built on point-by-point rhythm to flow as was clearly first intended. Take the biker (or “Green Hornet”), whose involvement is so essential to this entire film: in the theatrical edition, we first see him up-close as he’s arriving at a warehouse-cum-home; the extended cut provides a more formal introduction, however “formal” one considers a full story concerning the consumption of dog food that ends in a joke regarding the licking of one’s own testicles. What it does, more than anything, is lend an extra hand to The Counselor’s cast — an ensemble that may seem inert at first pass when the film requires of them (particularly Fassbender’s straight-laced performance) things we do not necessarily expect. Cameron Diaz’s Malkina may be the most striking case when it comes to alterations in both narrative and performance: her true motives and involvement are filled in rather clearly within the first hour, heavily (if not wholly) removing the theatrical edition’s sense of an unraveling curtain — and while I may have liked the odd play of this reveal the first time out, her presence has been rendered both more malevolent and credible. (No sign of her original voice work, sadly.)

These newfound expressions of admiration are not to suggest that The Counselor, in this reborn form, reveals itself as some kind of neglected masterpiece, for a few of my then-present issues remain intact. While I regret labeling Scott’s direction as “indifferent” — in his compositions are there numerous moments of elegance and elegant brutality (the assembling of a decapitation-friendly razor wire is terrific), and even his odd, mid-conversation camera zooms jibe more on a second viewing, sometimes (even if superficially) reminding one of Altman — it’s unfortunate that this Blu-ray would also make clear that some aesthetic choices settled upon by the helmer and cinematographer Dariusz Wolski were, frankly, a bit of an eyesore. I had been willing to blame this on a press screening’s crummy projection, but while observing the disc on two strong systems — a Panasonic projector, in one case; the other exhibitions were through a Sony player connected to a 1080p television display — gave me something that looked slightly better (several scenes are flat-out pleasing, no matter the flatness of a composition), I’m still unable to say it looks particularly good.

Yet to finally have a more full and coherent adjustment toward one of The Counselor’s two essential components is enough to let me accept this most unusual of Ridley Scott-Cormac McCarthy beasts. It’s unfortunate that the more “pure” iteration would only be available on Blu-ray, but the disc’s inclusion of both versions might be incentive enough — if nothing else, we have room to compare how a film can be defined by that which would otherwise sound extraneous to the ordinary ear. If you learn one thing from the experience, you’re already ten steps ahead those walking corpses in southern Texas.

The Counselor is now available on home video from 20th Century Fox. Have you see the director’s cut? Did it improve your stance on the film?