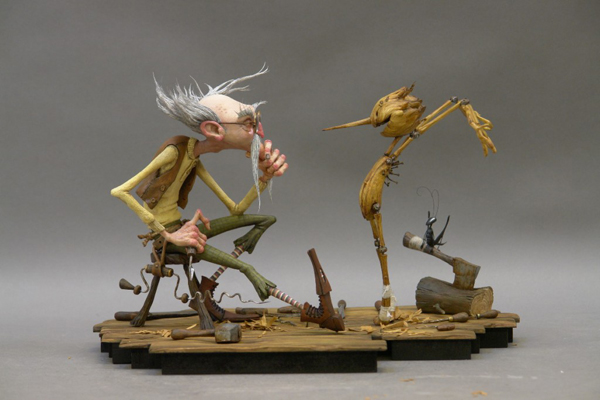 When you’re in post-production on an effects-heavy movie, only after which you’ll jump into another, tertiary projects are almost bound to get cut. (Most are lucky to even stay alive.) For Guillermo del Toro, this is certainly nothing new.

What’s happening here still, somehow, surprised yours truly to a certain margin. In spite of reports which would point toward heavy work already being underway, co-writer Gris Grimly‘s since-deleted tweets (via BleedingCool) indicate that the director’s first foray into stop-motion, Pinocchio, has — on account of it being “not the right time for such a superior-adventurous flick” — been deemed an unreasonable endeavor by The Jim Henson Company. (Because Tim Burton can’t ruin enough things, the failure of Frankenweenie sounds to have been a central cause.)

Back in May, news portrayed an active film, including plans to have Tom Waits and Daniel Radcliffe voice Geppetto and the wooden puppet, respectively, while Christopher Walken would add some further weirdness to it all. Then, in June, concept art had only further emboldened the idea that it was not only truly coming together, but could have some visual pinache to its name. Is this the end of it all? Grimly‘s wording makes me think this one has some chance of reemerging further down the line (maybe after financial concerns are quelled), so this may not have been a total loss.

These were del Toro‘s comments at the time:

“There has to be darkness in any fairy tale or children’s narrative work, something the Brothers Grimm, Hans Christian Anderson and Walt Disney understood. We tend to call something Disney-fied, but a lot of people forget how powerfully disturbing the best animated Disney movies are, including those kids being turned into donkeys in Pinocchio. What we’re trying to do is present a Pinocchio that is more faithful to the take that Colodi wrote. That is more surreal and slightly darker than what we’ve seen before. The Blue Fairy is really a dead girl’s spirit. Pinocchio has strange moments of lucid dreaming bordering on hallucinations, with black rabbits. The sperm whale that swallows Pinocchio was actually a giant dogfish, which allows for more classical scale and design. The many mishaps Pinocchio goes through include several near-death close calls, a lot more harrowing moments. The key with this is not making any of it feel gratuitous, because the story is integrated with moments of comedy and beauty. He’s one of the great characters, whose purity and innocence allows him to survive in this bleak landscape of robbers and thugs, emerging from the darkness with his soul intact.”

Good news for Grimly: Henson have shown a liking for his own book, Little Jordan Ray’s Muddy Spud, and are thinking that could sustain its own feature. According to Amazon, it contains “Jordan Ray, a down-and-out peasant, a mad hare, a grumpy old troll, an oyster, a knight, a water nymph, a griffin and an eclectic collection of supporting characters” — all of which should offer a good opportunity for animation.

Is it disappointing to here del Toro’s project fell through?