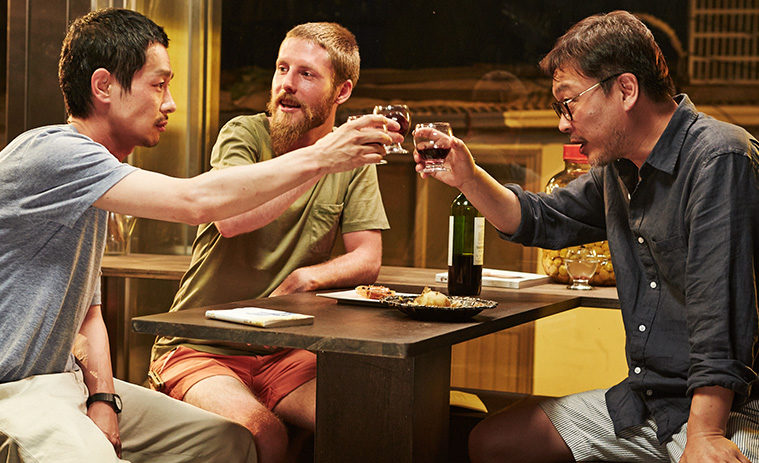 Although he’s yet to have anything even remotely resembling a mainstream break, the soju- and sex-littered films of Hong Sang-soo continue delighting those with enough will to seek them out. After 2013’s double-pairing of Our Sunhi and Nobody’s Daughter Haewon, the South Korean favorite is about to premiere his next offering, Hill of Freedom, a brief (66-minute) and, for the first time in his career, primarily English-language feature. More accessible, then? Judging by the available material, perhaps not.

There’s one trailer and three available clips, all of which are very much “Hong”: tightly locked shots of conversation and / or observation — complete with a bit of soju drinking, obviously — pertaining to love’s various complications. Those of us who are keen on his formal and narrative approaches, repeated film after film — how funny that particular actions even recur across the provided footage — should be excited. If you’ve yet to experience one of his pictures, Hill of Freedom might be your place to start.

Watch it all below: Kwon (Seo Young-hwa) returns to Seoul from a restorative stay in the mountains. She is given a packet of letters left by Mori (Ryo Kase), who has come back from Japan to propose to her. As she walks down a flight of stairs, Kwon drops and scatters the letters, all of which are undated. When she reads them, she has to make sense of the chronology… and so do we. Hong Sang-soo’s daring new film, alternately funny and haunting, is a series of disordered scenes based on the letters, echoing the cultural dislocation felt by Mori as he tries to make himself understood in halting English. At what point did he drink himself into a lonely stupor? Did he sleep with the waitress from the Hill of Freedom café (Moon So-ri) before or after he despaired of seeing Kwon again? Sixteen films into a three-decade career, Hong has achieved a rare simplicity in his storytelling, allowing for an ever-increasing psychological richness and complexity.

Hill of Freedom will play at this year’s TIFF and NYFF.

Are you a Hong fan? Based on your appreciation, how does this trailer play?