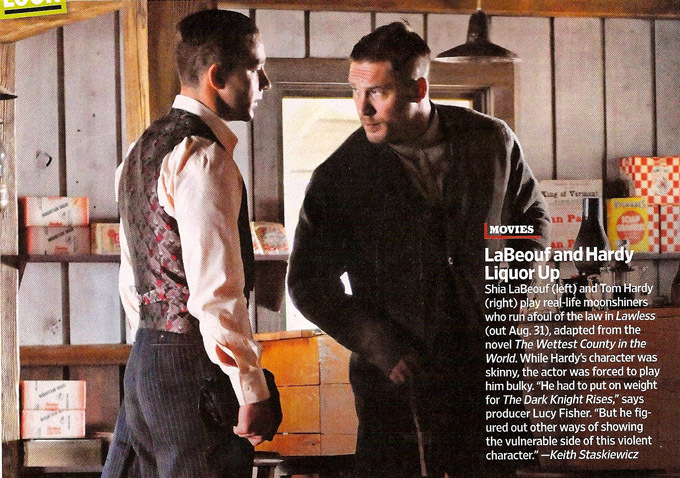 Up until now, our only looks at Lawless, the new film by John Hillcoat (director of The Road and The Proposition), were set photos. While these stills gave us a good look at the costumes and settings, it was only a matter of time until we got our first official shots of the film (which, up until a few days ago, was called Wettest County).

Coming from EW (via The Playlist), this still shows us Tom Hardy and Shia LaBeouf as two of the three Bondurant brothers (the third of whom is played by Jason Clarke), who comprise the heart of this story of bootlegging and violence in Prohibition-era Virginia. Based on Matt Bondurant‘s book — which is at least grounded in real events — Lawless follows the trio as they produce and run bootleg whiskey out of Franklin County, one of the most whiskey-rich counties in the country. Not only do they have to protect their business from the Alcohol Tax Unit, but also thieves, cops, and attempts at exploitation from county officials. And what better way to protect an enterprise than through violence?

I’m in the middle of the book now, and I can say that this image is a pretty close approximation to the ones conjured in my head. It’s a thrilling read thus far, and the setting and story seem perfectly suited to Hillcoat‘s sensibilities as a director. Hardy is a bit more muscled than the book’s Forrest, but given the character’s personality — and how well Hardy would fit it — I think I can look past that small bit of infidelity to the source. LaBeouf is a wild card for me, but I have faith that he can get across Jack’s confusion and fledgling attempts at independence.

Anyway, that’s my two-cents on this picture as a reader of the book, what do you think?