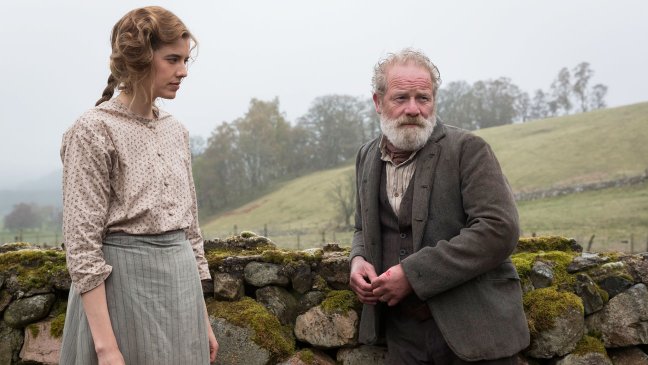 Here’s one that got started a bit under the radar: Terence Davies is reported — first by the Hurricane Films Twitter account, then through ScreenDaily — to be in New Zealand for the production of his next feature, Sunset Song, which pairs the English legend (most recently of The Deep Blue Sea) with Peter Mullan, Agyness Deyn (the Pusher remake), and Kevin Guthrie (Sunshine on Leith). Let it be relayed, first and foremost, that Hurricane Films’s tweet proudly promoted use of the Arri 65, a 65mm-film camera that is expected to “ensure depth, clarity and emotional impact on the screen” — regardless of how apparent these may have already been in the man’s past efforts.

In adapting a Lewis Grassic Gibbon-penned novel — one “widely regarded as one of the most important works in Scottish literature” (don’t look at me like that when I say I’ve never read it) — Davies‘s next picture stars Deyn as “a young woman coming of age as her family is beset by tragedy” in pre-WWI Scotland, the “great social upheaval and unrest” of that time “bring[ing] some of the worst aspects of the modern world to [their] remote rural community.” With an ambition “to capture the grandeur of the Scottish landscape” very much on their mind, SellOutPictures and IRIS Productions are taking completed footage to Cannes for interested buyers, with Sunset Song itself expected to arrive in 2015. Count it as one of our most-anticipated of that year, full-stop. [THR]

Below, more production stills and shot of Davies in action. For something far less important, there’s also a first look at the Railway Man reunion no one asked for: Before I Go to Sleep, in which Nicole Kidman plays a woman who awakes every morning with no memory, only to be told by her husband (Colin Firth) that some traumatic event has required her to stay at home. Things, however, begin to both focus and unravel when a doctor (Mark Strong) helps her reconstruct a memory of deceit on her supposed husband’s part. Any impressions from these few images? Which film are you most looking forward to? (The Kidman-Firth one? What?)