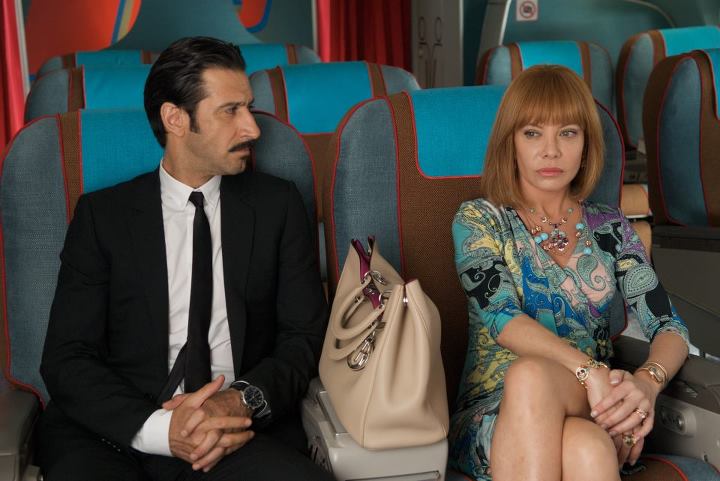 In following last fall’s The Skin I Live In, Pedro Almodóvar has started to roll cameras on the next romp, I’m So Excited, an airplane-set return to his comedic roots that boasts both an alumni-filled cast and a fun premise. (In which people on a crashing plane share their secrets when they think death is knocking at cabin door.) While shooting must have only just started, the director’s Facebook page (via ThePlaylist) has brought a smattering of new photos — a few of which appear to come directly from the film — along with some comments from the man himself.

First, you can read that:

“The ‘passengers love’ tells the story of a group of people trapped in a single set, and disconnected from the outside. Writing the script began as a whim and ended up comedian as an ensemble comedy, moral, oral and unreal, or unrealistic. I tried to leave reality aside, but sometimes reality is strained without you noticing. I have had no conscious film reference during pregnancy, is more present theater, even television, and my claustrophobia, than film. I am of such directors to which television influences them but not see it. I am appalled and yet I love the new narrative television.

In any case, the word is the main character. I have always confessed that my vocation was to become a great novelist, and I exercised while waiting for when the time came I wrote a lot of scripts, but over time I’ve become a great novelist, not even a novelist, I guess in recent scripts is where most perceived nostalgia for fictional narrative, but I wrote ‘Lovers passengers’ from another nostalgia, theater. My films owe much to the theater, are filled with scenes of two monologues indisimulados [?] sometimes. In this [film] there are more characters than usual but less space than ever.There have been several films about a group trapped, you can not leave where you are, (and the TV is full of competition and survival claustrophobic) from Luis Bunuel‘s ‘The Exterminating Angel,’ to ‘Buried‘ by Rodrigo Cortez [sic] where everything happens in the smallest space imaginable, a coffin.”

I just want to say that jumping from Buñuel to Mr. Red Lights is what I’d consider “covering your bases.”

And, of course, you can take a gander at the (occasionally very small) shots below: I’m So Excited is led by Javier Cámara (Talk to Her), Cecilia Roth (All About My Mother), Lola Dueñas (Volver) José María Yazpik (The Burning Plain), Carlos Areces (Extraterrestrial), and Raúl Arévalo; Antonio Banderas, Penélope Cruz, and Paz Vega will make cameo appearances. The film is expected to open next summer, presumably after a Cannes premiere.

Does this collection of stills and brief comments from the director himself wind you up for Excited?