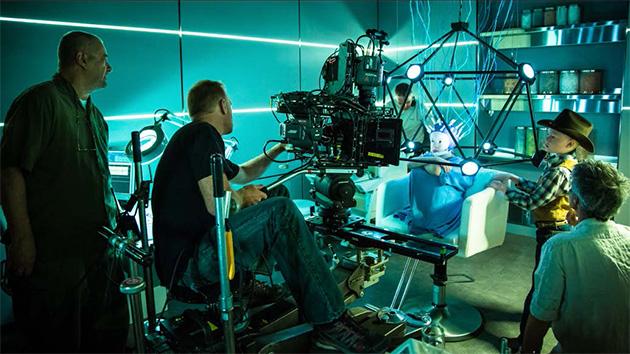 When a visual master such Jean-Pierre Jeunet embraces some new format, attention is demanded — especially when the results are coming soon. Maybe not soon enough, though we’ve still been handed a (very) preliminary first look at his next film, a 3D family feature titled The Young and Prodigious Spivet. (Once known as The Selected Works of T.S. Spivet, the same title of the Reif Larson upon which it’s based.) Not in the form of an official still, per se, but photos of the production as things were underway. Take it or leave it.

I’ll take it, if only because this little bit is more enticing than, for instance, another shot of some superhero costume. Along with the above picture, we’re able to see the main character, T.S. Spivet (Kyle Catlett), and his sister, Gracie (Niamh Wilson); BleedingCool speculate the other image features his brother, Layton (Jakob Davies). (But, who can say.) It’s from a distance and the most interesting shot is heavily obscured by a camera / crew, but isn’t it a little enticing? I’m glad to have been reminded of Jeunet‘s next film, at least.

The other images can be seen below (via CreativeCow): Here’s what stereographer Demetri Portelli said about the director’s use of 3D:

“This is an important film for the 3D industry, Jean-Pierre is a master filmmaker who is shooting very ambitious material on a modest budget. The film stands to prove that extraordinary 3D images can be created of the highest quality with a director who visualizes the story from its inception to be shot in ‘native 3D capture.’ Jean-Pierre embraced the medium with on-set 3D systems to tell the story of ‘T.S. Spivet.’ The director will seize many 3D opportunities ‘in the moment’ as he blocks the scenes and composes his shots. I am amazed at Jeunet’s storyboards and how he conceived the film originally in 3D from the script stage. He is playing with the depth space and the timing for his 3D moments.”

Helena Bonham Carter, Judy Davis, and Dominique Pinon also star in The Young and Prodigious Spivet, which is expected to arrive sometime next fall.

With these out in the open, are you already salivating for Jeunet’s latest work?